“I was dismayed to see all the press coverage incorrectly stating that Mr Weinstein was trying to garner sympathy at his court appearance last week.
Mr. Weinstein was in a serious car accident in August, which resulted in a concussion and has now necessitated the need for back surgery later this week.  He has been using a walker to assist him as the back pain has increased.  He wanted to leave the walker in the car, so it did not appear that was he looking for sympathy, as he is not.
The press surrounding his physical condition is mean spirited and false.” 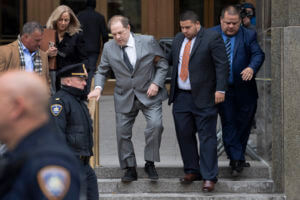