TOPEKA, Kan. (AP) — The Kansas Supreme Court upheld on Friday most of the convictions against a Wichita woman for torturing and killing a man in a crime that the trial judge called “horrific beyond imagination.” 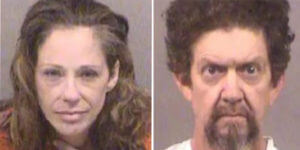 Heidi Hillard and her husband, Jeff, were convicted of participating in the November 2016 killing of 33-year-old Scottie Goodpaster Jr. of Wichita. Both were sentenced in 2018 to life in prison without the possibility of parole for 50 years.

Prosecutors say Goodpaster and a woman were kidnapped because of $185 in missing drug money. Goodpaster was attacked at a home in Valley Center with an ax, knife and staple gun, and suffered genital injuries. His body was found hanging from a tree six days later.

The court affirmed Heidi Hillard’s convictions and sentences for premeditated first-degree murder, felony murder, aggravated kidnapping, aggravated battery and rape. It overturned her conviction for conspiracy to distribute a controlled substance after concluding the state presented insufficient evidence to support that charge.

The Supreme Court ruled the lower court did not abuse its discretion in admitting as evidence an audio recording of the victim’s interrogation. It also determined the prosecutor did not misstate the law and the court did not err in its jury instructions.