RENO, Nev. (AP) — A 22-year-old Salvadoran immigrant who was facing two death penalty trials in the killings of four people in northern Nevada will plead guilty Thursday in an agreement that will put him in prison for the rest of his life, a prosecutor said.

Wilber Ernesto Martinez Guzman is due in a Reno courtroom to admit killing a Reno couple and two women in Gardnerville during a two-week stretch in January 2019, Washoe County District Attorney Chris Hicks said. 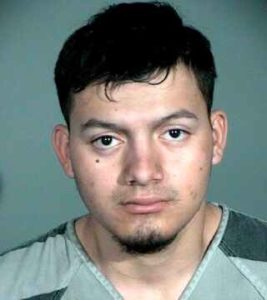 The plea deal will fully resolve murder, burglary and weapon cases in Washoe and Douglas counties with what Hicks said will be “a full and complete admission of guilt on the part of the defendant” and “maximum sentences” that will run consecutively.

Hicks and Douglas County District Attorney Mark Jackson had planned a death-penalty trial, but the Nevada Supreme Court Sept. 30 that Martinez Guzman would have to be tried separately in their two jurisdictions.

Prosecutors say Martinez Guzman stole a handgun from Gerald and Sharon David in southwest Reno in early January 2019, shot and killed Constance Koontz and Sophia Renken in Gardnerville several days later, and returned to the Davids’ home to rob and kill them.

Police say Martinez Guzman told them he committed the crimes because he needed money to buy methamphetamine.