WILBER, Neb. (AP) — A three-judge panel began hearing evidence Wednesday to decide whether a woman should become the first female sentenced to death in Nebraska for her role in the killing and dismemberment of a woman she met through a dating app.

Bailey Boswell was convicted of first-degree murder and conspiracy to commit murder last year for the slaying of Sydney Loofe. Boswell’s boyfriend during the murder, 54-year-old Aubrey Trail, was sentenced to death last month for fatally strangling Loofe and dismembering her body. 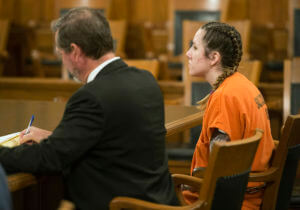 FILE – In this Aug. 6, 2018 file photo, Bailey Boswell, right, listens during a hearing in Saline County Court in Wilbur, Neb. A three-judge panel began hearing evidence Wednesday, June 30, 2021, to determine whether Boswell, convicted in the murder of a hardware store clerk, will become the first woman in Nebraska to get a death sentence. (Eric Gregory/Lincoln Journal Star via AP, Pool File)

Authorities say Boswell lured Loofe, a 24-year-old clerk at a Menards hardware store, to her death through the dating app Tinder. Loofe’s body parts were found in garbage bags, cut into 14 pieces and left in ditches along country roads in southeastern Nebraska.

Prosecutors on Wednesday presented graphic autopsy photos to bolster their case that Boswell, 27, deserves to die for the crime.

Prosecutor Doug Warner of the Nebraska attorney general’s office argued that Boswell set up three Tinder accounts to arrange dates with women and bought tools that could be used to dismember a body shortly before her last date with Boswell.

Warner pointed to previous testimony from three other women Boswell and Trail recruited that painted them as fascinated with group sex and gaining powers by torturing and killing someone. He noted that Loofe’s internal organs were missing when they found her remains, arguing that the murder was especially depraved and deserving of the death penalty.

Boswell’s court-appointed attorney, Todd Lancaster, urged the judge panel to view his client based on her actions, and not those of Trail.

“It’s the state of mind and actions of Bailey Boswell” that are relevant, Lancaster said.

Lancaster said the discussions of murder and torture are irrelevant because it happened weeks before Loofe met Boswell in person.

He also said that the dismemberment of the body occurred after Loofe had been killed, and that some courts have ruled that postmortem mutilation — particularly if used only to dispose of a body — should not be used to justify a death sentence.

The three-judge panel is expected to hear evidence through Friday and impose a sentence several weeks later. Boswell, a former high school athlete from Leon, Iowa, could get the death penalty or life in prison.