DENVER (KMGH) — A Denver Police Department sergeant was arrested Wednesday morning in Jefferson County, Colorado for investigation of internet luring of a child after he allegedly made “explicit advances” on a person online who he thought was a 14-year-old girl. 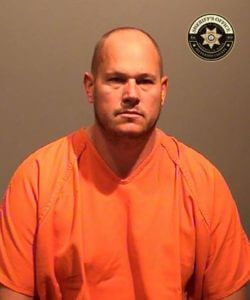 DPD Sgt. Timothy Hyatt, 45, turned himself in to the Jefferson County Sheriff’s Office’s Cheezo Unit and Special Investigations Unit at 9 a.m. Tuesday. The Denver Police Department said it was notified of the allegations against Hyatt on Tuesday evening.

According to the Jefferson County Sheriff’s Office, Hyatt started communicating on various social media platforms with a person he believed to be a 14-year-old girl. The sheriff’s office said he was using “a variety” of identities online to communicate.

“During the virtual interactions, Hyatt made many sexually explicit advances toward the young teen,” the sheriff’s office said in a news release.

Investigators were eventually able to confirm his actual identity, which led to his arrest Wednesday.

Hyatt has worked for the Denver Police Department since 2005. The department said in a release he is now on non-paid administrative leave.

He was cleared in the deadly shooting of a carjacking suspect in Aurora in 2020 and was previously disciplined for dumping trash into a business owner’s dumpster, as CSB4 reported.

Internet luring of a child is a class 4 felony in Colorado. If Hyatt is convicted of the charge, he would no longer be able to work as a police officer in the state.

“DPD finds these allegations very concerning,” the department said in a statement. “…Since the criminal investigation is being conducted by the Jefferson County Sheriff’s Office, DPD is unable to comment further on the case.”

Hyatt is scheduled to make his first court appearance on Thursday and is expected to be advised of the charges against him and have a bond set in the case.

This story was originally published Aug. 10, 2022 by KMGH in Denver, an E.W. Scripps Company.