“Drop the knife for me, man. Come here real quick. You’re OK,” said a member of the Detroit Police Department’s crisis intervention team about 5 a.m. EDT Sunday on the city’s west side. “You’re not in any trouble. Can you just talk to me and drop the knife?”

But Burks — who had a history of struggling with mental illness — didn’t drop the knife and after pacing in the middle of the street suddenly sprinted toward officers, who fired 38 shots in three seconds. Burks was pronounced dead at a hospital.

Officers initially were called to a home on the west side about a knife-wielding man who was having a mental health crisis and spoke to a man who identified himself as Burks’ brother. The man said Burks had slashed the tires on his car.

Burks later was found walking along a nearby street. Officers can be heard on the body camera footage telling him not to approach the officers and to put the folding knife down.

Burks replied: “No, I am not,” minutes before sprinting toward the officers.

Five fired their weapons. Burks suffered about 15 wounds, according to police. 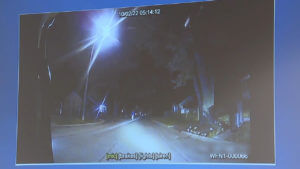 This image from video provided by E.W. Scripp’s WXYZ in Detroit shows the police bodycam footage from the fatal police shooting of 22-year-old Porter Brooks on Sunday, Oct. 2. Police showed parts of the bodycam footage to reporters on Oct. 4. (WXYZ)

“The officers had to stop a threat. They felt threatened,” he said. “There’s no time in three seconds — and someone charging at you with a knife — to look over to see what other people are doing. You, as a trained police officer, are trained to stop the threat.”

Officers intended to get Burks “some help … to get him secured and to a hospital,” White said.

It was not Burks’ first contact with Detroit police.

On June 26, he was admitted to a Detroit hospital psychological ward after he was found walking in his neighborhood “looking to fight someone,” police said.

Burks escaped two days later in hospital garb and was arrested by officers as he ran in and out of traffic.

“This is not just a police matter,” White said. “We need help with this system. The officers are routinely put into this mode, and candidly, we’re seeing more and more violent episodes.”

Advocates for people with mental illness say they face greater risk of a police encounter resulting in their death.

Hannah Wesolowski, chief advocacy officer of the National Alliance on Mental Illness, told The Associated Press for a story last month that many communities lack a mental health crisis infrastructure, and that nearly 130 million people in the United States live in areas with a shortage of mental health providers.

The Treatment Advocacy Center said in a 2015 report that people with untreated mental illness are 16 times more likely to be killed during a police encounter than other people approached by law enforcement.

The officers who fired shots Sunday at Burks have been placed on administrative leave.

State police are investigating Sunday’s shooting and will submit their findings to the Wayne County prosecutor’s office. Meanwhile, Detroit police are conducting an internal administrative probe.

On Monday, attorney Geoffrey Fieger said his firm had been retained by the Burks’ family and was working to obtain evidence from the shooting.