MINNEAPOLIS (AP) — The jurors seated so far in the trial of a former Minneapolis police officer charged in George Floyd’s death are a diverse group, an element being closely scrutinized in a case where race plays such a central role.

Nine jurors have been seated through Monday, including five who are white; one who is multiracial; two who are Black and one who is Hispanic.

Some news organizations reported the racial makeup of the jury mainly by appearances last week before Hennepin County Judge Peter Cahill, mindful of strong public interest in the case, began releasing each juror’s race after they were selected.

Floyd, a Black man, was declared dead on May 25 after Derek Chauvin, who is white, pressed his knee against his neck for about nine minutes. Floyd’s death sparked sometimes violent protests in Minneapolis and beyond and led to a national reckoning on racial justice. Chauvin is charged with murder and manslaughter.

The jurors include six men and three women and ranges in age from their 20s to their 50s. The selection process resumes Tuesday and continues until 14 people — 12 to deliberate and two alternates — are seated. Opening statements are March 29 unless the process isn’t complete by then. 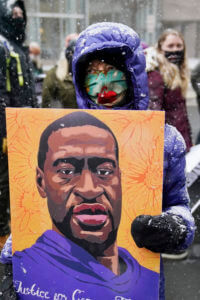 On Monday, Chauvin attorney Eric Nelson asked Cahill to postpone the trial, arguing that the jury pool was likely tainted by Friday’s announcement that the city of Minneapolis would pay $27 million to Floyd’s family to settle their civil lawsuit.

“It is profoundly disturbing to the defense,” Nelson said of the settlement in the midst of jury selection. “This is not fair.”

Cahill didn’t immediately grant the delay, but he acknowledged that the timing was “unfortunate” and said he would consider it. He said he likely would recall the seven jurors who were seated last week for further questioning, though he already instructed members of the jury pool to avoid all news coverage of the case.

The first potential juror questioned Monday was quickly dismissed after volunteering that she’d heard about the settlement and presumed it meant the city didn’t feel it would win the civil case.

“When I heard that, I almost gasped at the amount,” she said, adding that she couldn’t promise she could disregard it.

Potential jurors questioned later didn’t mention hearing of the settlement, and neither attorneys nor the judge directly asked if they were aware of it.

The two jurors seated Monday include a Black man in his 30s who works in banking, coaches youth sports and does creative writing as a hobby, and a white woman in her 50s who works as an executive assistant at a health care clinic.

The man said in his juror questionnaire that he had neutral impressions of Chauvin and Floyd, and didn’t believe Chauvin set out to murder anyone. He also wondered why other officers didn’t intervene.

“I don’t know if he was doing something wrong or not, but somebody died,” the man said. “Even if you have no intention of doing something and something happens, somebody could’ve still intervened and prevented that.”

The woman said she was “disturbed” by bystander video showing Chauvin with his knee on Floyd’s neck, and couldn’t watch the whole thing.