NEW YORK (AP) — For a fifth time, British socialite Ghislaine Maxwell has lost a bid to be freed on bail while she awaits trial on charges she recruited teenage girls for the millionaire Jeffrey Epstein to sexually abuse. 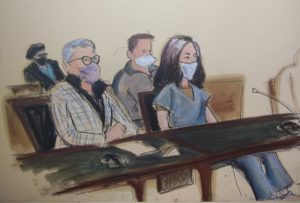 In this courtroom sketch, Ghislaine Maxwell, far right, appears in Manhattan Federal court seated next to her attorney Bobbi C. Sternheim, second from left, along with her sister Isabel Maxwell, far left, during her arraignment on a superceding indictment, Friday, April 23, 2021, in New York. Maxwell, a British socialite and one-time girlfriend of Epstein, pleaded not guilty to sex trafficking conspiracy and an additional sex trafficking charge that were added in a rewritten indictment released last month by a Manhattan federal court grand jury. The new indictment stretched the timespan of the charges from three years to a decade. (AP Photo/Elizabeth Williams)

The 2nd U.S. Circuit Court of Appeals in Manhattan issued a brief order Wednesday rejecting Maxwell’s latest request. The three-judge panel that issued it did not elaborate.

The appeals court had rejected a bail request once before and her trial judge had thrice said no.

In the latest bail quest, Maxwell’s lawyers asked the appeals court to at least order the lower-court judge to conduct a hearing where evidence related to bail could be shown. The 2nd Circuit rejected that, too.

Maxwell, 59, has been incarcerated since last July. She has pleaded not guilty to charges including sex trafficking and conspiracy that allege she recruited at least four females for Epstein to sexually abuse between 1994 and 2004.

Her trial was recently moved from July to November.

Epstein killed himself in a federal Manhattan lockup in August 2019 while he awaited a sex trafficking trial.

Maxwell’s lawyers have argued she has been mistreated at a federal jail in Brooklyn, though prosecutors dispute the allegations.

Her lawyers have gradually increased the terms of a proposed bail package, saying Maxwell and friends and family would put up $28.5 million. They also say Maxwell, a U.S. citizen, would agree to 24-hour armed guards, an electronic bracelet and renounce her citizenship in England and France.

David Oscar Markus, Maxwell’s appeals attorney, said in an email that his client “is subjected to more grueling conditions than any other inmate” at the Metropolitan Detention Center in Brooklyn.

He described the facility as a “complete disaster” and said Maxwell can’t adequately prepare for trial in a facility where she is awakened every 15 minutes at night when guards shine a light into her cell to check on her.

“We all know the truth — this is due to the Epstein effect. Because Epstein died on the jail’s watch, it has decided to torture Ghislaine. That’s wrong,” Markus said.