COLORADO SPRINGS, Colo. (AP) — A former nurse in Idaho who admitted to helping a Colorado rancher cover up the killing of his fiancee Kelsey Berreth was released on parole after receiving a reduced sentence.

Krystal Jean Kenney, 34, was released Tuesday from Denver Women’s Correctional Facility after being resentenced to 18 months in prison for evidence tampering in the 2018 death of Berreth, The Gazette reported. 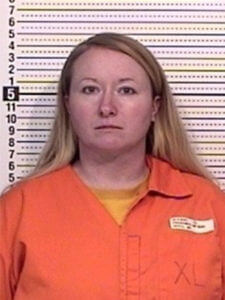 Teller County District Judge Scott Sells said during the resentencing that Frazee solicited her three times to try to kill Berreth, and that she had opportunities to warn Berreth.

Kenney was originally sentenced to three years in prison, but the Colorado Court of Appeals overturned that sentence last month, ruling Sells erred by sentencing Kenney in the “aggravated” range and not the lower “presumptive” range.

Colorado Department of Corrections spokeswoman Annie Skinner said on Tuesday that Kenney was “past her mandatory release date” based on the new sentence and was released.

Kenney was the main witness to testify against Teller County rancher Patrick Frazee, with whom she had a yearslong, on-and-off relationship and who was convicted of first-degree murder in Berreth’s death. Berreth was last seen in 2018.

Frazee was sentenced to life without parole plus 156 years. He is serving his sentence at Arkansas Valley Correctional Facility.

Kenney declined to make a statement during her hearing. Her attorney, Dru Nielson, previously said the new penalty would leave Kenney eligible for automatic parole, given credit for time served and good behavior.

It is unclear where Kenney will be under supervised release. Nielson did not respond to requests seeking comment.

Prosecutor Jennifer Viehman told the court on Tuesday that while she believed that Sells made “the appropriate ruling” in imposing his original sentence, she acknowledged that he would be forced to reduce her penalty. Berreth’s relatives did not speak at the hearing.