BOSTON (AP) — Francis “Cadillac Frank” Salemme, the once powerful New England Mafia boss who was serving a life sentence behind bars for the 1993 killing of a Boston nightclub owner, has died at the age of 89, according to the Bureau of Prisons.

Salemme died on Tuesday, according to Bureau of Prisons’ online records. Bureau officials did not immediately respond to an email seeking more information on Sunday. Salemme’s death was first reported Sunday by WPRI-TV. 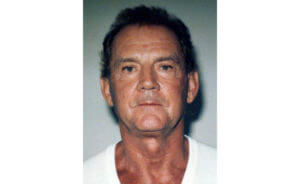 FILE – This 1995 file photo taken in West Palm Beach, Fla., and released by the FBI shows Francis P. “Cadillac Frank” Salemme. Salemme, the once powerful New England Mafia boss who was serving a life sentence behind bars for the 1993 killing of a Boston nightclub owner, has died at the age of 89, according to the Bureau of Prisons. Salemme died on Tuesday, Dec. 13, 2022, according to Bureau of Prisons’ online records. (Federal Bureau of Investigation via AP, File)

Salemme led the Patriarca crime family in Boston in the early 1990s before helping prosecutors convict a corrupt FBI agent after learning that other mobsters had been talking about him to authorities.

Salemme, who has admitted to a slew of other gangland killings, was living in Atlanta under the name Richard Parker when remains of the nightclub owner were unearthed in 2016, making the elderly ex-Mafia don a government target once again.

Salemme’s 2018 trial became a flashback to the days when the mob was a feared and powerful force in New England. Salemme maintained he had nothing to do with Steven DiSarro’s death, but was convicted after his onetime best friend testified against him.

Salemme participated in numerous killings in Boston’s 1960s gang wars and spent 16 years behind bars for trying to kill a lawyer, who survived but lost a leg, when his car was blown up in 1968. After being released from prison, Salemme was seriously wounded in a shooting outside a suburban Boston pancake house.

His reign as Mafia boss ended when he, notorious Boston gangster James “Whitey” Bulger and others were charged in a sweeping racketeering case in 1995. Salemme and Bulger fled after they were tipped off to the impending indictment by Bulger’s FBI handler, John Connolly Jr.

Salemme was arrested in Florida several months later while Bulger spent 16 years on the lam before being captured at the age of 81 in Santa Monica, California. Bulger was killed by fellow inmates in prison in 2018 at the age of 89.

The racketeering case revealed that Bulger and Salemme’s best friend, Stephen “The Rifleman” Flemmi, had secretly worked as FBI informants. Upset that his fellow mobsters had turned on him, Salemme agreed to plead guilty and cooperate with authorities. 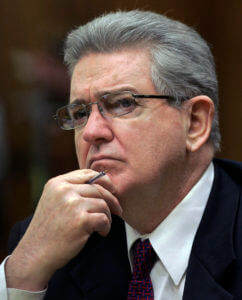 FILE- In this Oct. 15, 2008 file photo, former FBI agent John Connolly listens to the testimony during his trial in Miami. The imprisoned former FBI agent is serving a 40-year prison sentence for alerting former Boston mobster Whitey Bulger that he could implicated in a mob murder. (AP Photo/Alan Diaz, File)

Salemme testified in 2002 against Connolly, who was convicted of helping Bulger avoid prosecution. In exchange, Salemme was released from prison early and entered the witness protection program.

At his 2018 trial in Boston, Salemme’s slicked back, wispy grey hair and thin frame made him almost unrecognizable from the bulky, feared mob boss jurors saw in grainy surveillance photos from the 1990s.

DiSarro’s nightclub, The Channel, was under scrutiny at the time for the Salemmes’ involvement in the business. Just before DiSarro’s death, the FBI told him he was about to be indicted and should cooperate with the government against the Salemmes.

Salemme’s longtime attorney, Steven Boozang, said Sunday his client had been nothing but a “gentleman” to him and he believed the man “regretted a lot of the things he had done in his life, particularly the effects it had on his immediate family and the families of others.”

Before being sentenced to life in prison in 2018, Salemme rose from his chair, called the proceeding “ridiculous” and said DiSarro’s family hasn’t been told the truth. But he seemingly predicted years earlier that his own story would end behind bars.

“You’re not going to beat the government,” Salemme told a reporter in 2004. “Let’s face it. One way or the other, they’re going to get you.”