The search was the latest development in an inquiry that overlapped with the first impeachment trial of Donald Trump, who was accused of pressuring the leaders of Ukraine to investigate Joe Biden and his son. 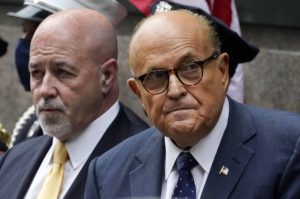 The probe involves a complex web of international characters who dealt with Giuliani as he tried to stir up support for a Ukrainian investigation of the Bidens.

Federal prosecutors haven’t disclosed which elements of Giuliani’s work are the focus of their probe, currently being led by Audrey Strauss, the U.S. attorney for the Southern District of New York.

But at least one part is an examination of whether Giuliani failed to disclose to the U.S. government work he did on behalf of foreign entities.

WHY IS GIULIANI UNDER INVESTIGATION?

Giuliani’s lawyer, Robert Costello, said the search warrants involved an allegation that Giuliani failed to register as a foreign agent.

The Foreign Agents Registration Act, originally passed before World War II to expose Nazi propaganda, requires people to disclose to the Justice Department when they have been hired to lobby in the U.S. on behalf of foreign governments, figures or political entities.

Criminal prosecutions under the law were once rare, but there have been a number of high-profile cases in recent years, including during special counsel Robert Mueller’s investigation into Russian election interference. Trump’s campaign chairman, Paul Manafort, was convicted of failing to register work he’d done for a political party in Ukraine. Trump’s first national security adviser, Michael Flynn, admitted making false statements about work he’d done for Turkey.

In addition, Imaad Zuberi, a political fundraiser who attracted attention for large donations to Trump’s inaugural committee, was sentenced in February to 12 years in prison for a violation of the foreign agents’ act and other crimes.

WHAT WORK DID GIULIANI DO ON BEHALF OF UKRANIAN INTERESTS?

In numerous interviews, Giuliani has said that his work in Ukraine was intended to benefit only one person: Trump.

His goal, he has said, was to get the Ukrainian government to investigate Biden’s son, Hunter, who had served on the board of a Ukrainian gas company.

However, at least some of the Ukrainian characters dealing with Giuliani as he tried to dig up dirt on the Bidens have said they also wanted his help with matters related to the U.S. government.

They included Ukraine’s then-prosecutor general, Yuriy Lutsenko. In interviews, Lutsenko has said he asked for Giuliani’s help arranging a meeting with the U.S. attorney general to discuss efforts to recover looted national assets. He also spoke with Giuliani about his clashes with the U.S. ambassador to Ukraine, Marie Yovanovitch. The Trump administration later removed Yovanovitch from her post.

If Giuliani lobbied the Trump administration on behalf of Ukrainian figures, he might have been obligated to disclose that work.

WHAT HAS GIULIANI SAID?

Costello, Giuliani’s lawyer, castigated Wednesday’s FBI raid as corrupt and said he can demonstrate that the former New York mayor did no work as a foreign agent.

Giuliani previously told The Associated Press he “never represented a foreign anything before the U.S. government.”

In the past, Giuliani has acknowledged that he considered taking on some Ukrainian figures and the Ukrainian government as paying clients, including Lutsenko, but said he ultimately decided not to do so.

That included deals that would have paid him hundreds of thousands of dollars, according to a New York Times report in 2019.

“I thought that would be too complicated,” Giuliani told the newspaper at the time. “I never received a penny.” 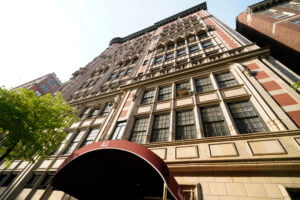 The residence of former New York City Mayor Rudy Giuliani is shown, Wednesday, April 28, 2021, in New York. A law enforcement official told the Associated Press that federal investigators have executed search warrants at Giuliani’s Manhattan residence and office. The former New York City mayor has been under investigation for several years over his business dealings in Ukraine. (AP Photo/Kathy Willens)

HAVE GIULIANI OR HIS ASSOCIATES BEEN CHARGED WITH ANYTHING?

Giuliani has not been charged with any crime and federal prosecutors have not publicly accused him of any misconduct.

Some of Giuliani’s associates in his campaign to dig up dirt on the Bidens have, however, been indicted.

Initially, prosecutors had accused them of also secretly working on behalf of an unnamed Ukrainian official who wanted the removal of the U.S. ambassador, but that allegation was subsequently quietly erased from a superseding indictment.

It isn’t part of the criminal case, but Parnas in 2019 also helped arrange for an Ukrainian tycoon, Dmitry Firtash, to hire lawyers to lobby the U.S. Justice Department to drop an international bribery charge pending against him in Chicago.

Firtash has said in interviews that at one time he was paying $300,000 per month to those lawyers, Victoria Toensing and Joseph diGenova, who were also involved in Giuliani’s campaign to pressure Ukraine to investigate the Bidens.

The FBI also executed a search warrant Wednesday on a phone belonging to Toensing, who has said she is not a target of the investigation.

Some documents that Toensing or diGenova gathered, ostensibly as part of Firtash’s attempts to fight extradition from Austria, wound up being the basis of conservative media reports that Joe Biden had tried to block a Ukrainian prosecutor from investigating the gas company that had put Hunter Biden on its board.

Biden did press for the prosecutor’s firing, but that’s because he was reflecting the official position of not only the Obama administration but many Western countries that the prosecutor was perceived as soft on corruption.