NEW YORK (AP) — An associate of Rudy Giuliani pleaded guilty Friday to a conspiracy charge alleging that he defrauded investors in a company supposedly created to prevent people from being defrauded. 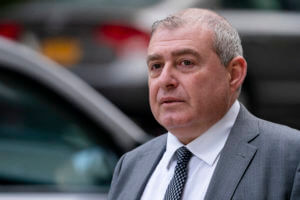 Parnas told Judge J. Paul Oetken that he conspired between 2012 and 2019 with another person to give investors false information about a Florida-based business, Fraud Guarantee.

He said he was “wrong at the time and I am truly sorry for my actions, your honor.”

Fraud Guarantee was promoted as a company that could protect investors against fraud.

The plea came months after the Soviet-born businessman was convicted of campaign finance crimes at a Manhattan trial. The judge set sentencing for June 29.

Prior to Correia’s sentencing, prosecutors said Correia and Parnas used false claims to induce at least seven investors between 2012 and 2019 to contribute between $200,000 and $500,000, saying the money would be used only for business interests and nothing personal.

The majority of the money from investors, though, was withdrawn as cash and spent on rent, luxury cars and retail stores by Parnas, prosecutors said.

During the fraud, Correia and Parnas agreed to pay Giuliani, a former New York City mayor who served as Donald Trump’s personal lawyer during part of his presidency, a $500,000 consulting fee to work with Fraud Guarantee. Correia was sentenced last year to a year in prison.

Parnas several years ago also worked with Giuliani to try to get Ukrainian officials to investigate the son of Democratic presidential candidate Joe Biden. Giuliani has said he knew nothing about the crimes of Parnas and others.

Giuliani has not been criminally charged, though federal authorities have acknowledged that he is being investigated to determine whether he violated a federal law that governs lobbying on behalf of foreign countries or entities.

In October, Parnas was convicted of six charges alleging that he made illegal donations in 2018 to jump-start a new energy company and used the wealth of a Russian financier to donate to politicians who might aid the launch of a legal, recreational marijuana business. He awaits sentencing in that case.