Lawyers for the suburban Minneapolis police officer on trial for killing Black motorist Daunte Wright are arguing that she made a mistake by drawing her handgun instead of her Taser before she fatally shot him. But they’re also arguing that she would have been justified in shooting him anyway.

Legal experts and attorneys following the case say it can be a bad idea to offer two defenses that may seem at odds — but not in this case. Lawyers for former Brooklyn Center Officer Kim Potter — she resigned two days after killing Wright — have said repeatedly that Potter didn’t consciously intend to pull her handgun from her holster. Their other argument is that Potter, 49, was entitled to use deadly force in order to prevent the 20-year-old Wright from driving off and potentially dragging one of her fellow officers with him. 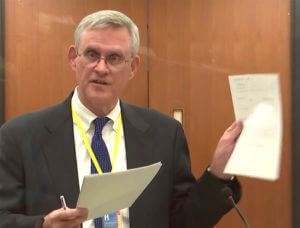 In this screen grab from video, defense attorney Paul Engh questions a potential juror as Hennepin County Judge Regina Chu presides over jury selection Thursday, Dec. 2, 2021, in the trial of former Brooklyn Center police Officer Kim Potter at the Hennepin County Courthouse in Minneapolis, Minn. Potter is charged with first- and second-degree manslaughter in the April 11 shooting of Wright, a 20-year-old Black motorist, following a traffic stop in the Minneapolis suburb of Brooklyn Center. (Court TV, via AP, Pool)

“There’s an old saying with attorneys that the only thing worse than one bad defense is two defenses,” said Joe Friedberg, a Minneapolis defense attorney who isn’t involved in the case. “Ordinarily, one defense detracts from each other, but I don’t think this one does.”

Friedberg said the defense team would have to use careful wording so as not to confuse or frustrate the jury, but that the two defense arguments are consistent with one another and could provide multiple rebuttals to the charges.

Prosecutors are trying to convict Potter of first- and second-degree manslaughter. The most serious charge requires prosecutors to prove recklessness, while the lesser requires them to prove culpable negligence, meaning that Potter “caused an unreasonable risk and consciously took a chance of causing death or great bodily harm” to Wright.

Potter, who is white, killed Wright, who wasn’t armed, during an April 11 traffic stop in Brooklyn Center in a shooting that was recorded by police cameras.

“The theory of the defense is that it was a mistake. The evidence shows that clearly,” said Joseph Daly, an emeritus professor at Mitchell Hamline School of Law.

Right after the shooting, Potter is captured on body camera footage saying “I just shot him. … I grabbed the wrong (expletive) gun!”

But Daly pointed out there was a problem with solely relying on that argument because police department policy bars officers from using a Taser on someone who is driving a vehicle, so Potter could still be found reckless or culpably negligent.

“How do you deal with that reality?” Daly said. “If you are trying to stop a fleeing felon or trying to save the life of a person, then you can shoot him. You have permission under the law to shoot him.”

In court, Potter’s attorney Paul Engh has asserted that the other officers who were trying to arrest Wright were partially in the car as he attempted to drive away.

“You’re in a vulnerable position if he drives away? If he takes off, you could be seriously injured? Or die?” Engh asked one of the officers, Anthony Luckey, during cross-examination. 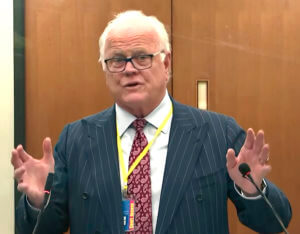 “Yes,” Luckey answered to each question. Another officer at the scene who was on the passenger side of Wright’s car, then-Sgt. Mychal Johnson, testified that he could have been dragged.

Daly said the dual defense strategy can be risky because posing two arguments in court generally “weakens both theories” before the jury. In Potter’s case, he felt it was necessary, especially if jurors’ feelings about her were affected by emotional testimony from Wright’s mother and girlfriend.

Engh has also worked to humanize Potter, describing her as a wife and mother, and a 26-year police veteran who had never fired her gun or Taser while on duty until she made a mistake by grabbing her handgun.

“He’s obviously trying to personalize her and make her likable to the jury,” said Mike Brandt, a Minneapolis defense attorney who has been following the trial. “He wants the jury to have sympathy for her.”

But prosecutors say Potter had extensive training that included explicit warnings about confusing a handgun with a Taser and that directed officers “to learn the differences between their Taser and firearm to avoid such confusion.”

“This is exactly what she had been trained for years to prevent,” prosecutor Erin Eldridge told the jury. “But on April 11, she betrayed her badge and she failed Daunte Wright.”

“Even though she made a mistake, that mistake is beyond reasonable,” said Daly, summarizing the prosecution’s argument. “It’s just simple recklessness because of her training and background and understanding of what the difference is between a Taser and a Glock.” 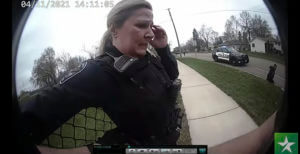 To counter that argument, Potter’s lawyers plan to call a police psychologist, Laurence Miller, to testify about so-called slip-and-capture errors — a psychological condition in high-stress situations where an officer performs the direct opposite of their intended actions. The “slip-and-capture error” explanation has been used in previous trials over police killings, including the trial of a transit officer who killed 22-year-old Oscar Grant in 2009 after responding to a fight at a train station in Oakland, California.

Some police use-of-force experts have expressed skepticism about the slip-and-capture theory, saying it hasn’t been proven.

The judge in Potter’s trial, Hennepin County District Judge Regina Chu, has ruled that Miller can explain the concept of slip-and-capture but cannot opine on whether it explains what happened to Potter.

After watching the first few days of proceedings, Daly said the trial posed difficult questions for the jury on a shooting that unfolded in seconds.

“Will the jury beyond a reasonable doubt find she was reckless or was culpably negligent?” he said. “Or was it simply a human mistake?”