DENVER — A man was arrested on charges of impersonating a peace officer after he attempted to stop an off-duty officer in Brighton, Colorado, according to the Adams County Sheriff’s Office.

Jose Flores Ortiz, 37, was booked into the Adams County Jail after the incident but has since bonded out. 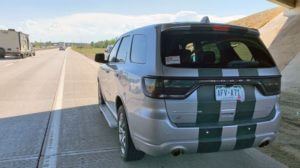 Moments later, police said the suspect started brake checking the off-duty officer, forcing the officer to the side of the road.

According to the sheriff’s office, Flores Ortiz wore a “security” shirt and approached the real officer while displaying a silver badge in his hand. The suspect was arrested on scene.

Authorities are advising motorists who may have doubts as to who is pulling them over to call 911 to confirm the identity of the vehicle.

This story was originally published Set. 7, 2022 by KMGH in Denver, an E.W. Scripps Company.