INDIANAPOLIS (WRTV) — A family argument turned fatal on Dec. 28, 2022 when one cousin shot another outside a northeast Indianapolis apartment.

Joshua Hopson, 31, died around 3 a.m. after being shot by his cousin , according to court documents. 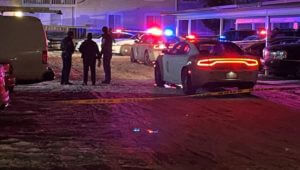 His cousin, 38-year-old Emmanuel “Manny” Newman, was arrested a week later in connection with the homicide.

According to court documents, the two were drinking and hanging out in an apartment before an argument ensued.

To deescalate the situation, Hopson’s girlfriend drove Newman away from the apartment around 2 a.m., according to court documents. Upon return to Alsuda Court, Hopsons’s girlfriend said the two were arguing over the phone.

The phone call ended when Newman said he was coming back to the apartment to kill Hopson, according to the probable cause affidavit for Newman’s arrest.

When Newman arrived, Hopson walked out of the apartment where surveillance video captured Newman shooting Hopson near his Cadillac, according to court documents.

Newman’s was located at a residence in Beech Grove and taken into custody, according to police.

He is charged with murder and is set for jury trial on March 13.

This story was originally published Jan. 11, 2023 by WRTV in Indianapolis, an E.W. Scripps Company.