Loved ones knew something was wrong when Perrin didn’t pick up her two-year-old child. Investigators said quick police work and a doorbell camera helped zero in on the suspect. 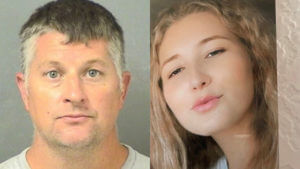 He said accused killer Eric Westergard led detectives to an overpass at the Okeechobee waterway at Highway 710, near Indiantown. That’s where they recovered 23-year-old Perrin Damron’s body.

“Our detectives were on it and very suspicious of him. There was never a point where we were able to eliminate him from suspicion,” he said.

Sheriff Snyder said loved ones knew something was not right when she failed to pick up her young son at his father’s house this past weekend. Within hours she was reported missing.

“We began looking. We did what we always do, checked jails, checked hospitals,” he said.

“It was actually a ring camera putting Mr. Westergard back at the house after he originally picked her up at 6:30.” Snyder said.

The Palm Beach County Sheriff’s Office gets involved because Westergard’s believed to have committed the crime in its county.

“The suspect made incriminating statements. There was some physical evidence found at the house and ultimately the suspect led us to the overpass,” Snyder added.

Westergard, a Jupiter Farms resident, is in the Palm Beach County jail.

He has been charged with first-degree murder.

This story was originally published September 6, 2021, by WPTV in West Palm Beach, an E.W. Scripps Company.