ANNAPOLIS, Md. (AP) — The family of the victim in the murder case chronicled in the first season of the “Serial” podcast has asked Maryland’s intermediate appellate court to halt Adnan Syed’s court case pending the family’s appeal of a judge’s overturning of Syed’s murder conviction. 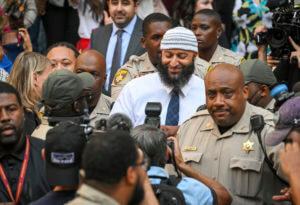 FILE – Adnan Syed, center, the man whose legal saga spawned the hit podcast “Serial,” exits the Cummings Courthouse after a Baltimore judge overturned his conviction for the 1999 murder of high school student Hae Min Lee on Sept, 19, 2022, in Baltimore. The family of the victim has asked Maryland’s intermediate appellate court to halt Syed’s court case, pending the family’s appeal of a judge’s overturning of Syed’s murder conviction. Prosecutors must decide whether to drop the charges against Syed or retry him for the killing by Oct. 18. (Jerry Jackson/The Baltimore Sun via AP, File)

Young Lee, the brother of victim Hae Min Lee, asked the Maryland Court of Special Appeals in a six-page motion filed late last month to suspend further proceedings, including an Oct. 18 deadline by which prosecutors must decide whether to drop the charges against Syed or retry him for the killing. He contends that the family was not given enough notice about a court hearing last month over whether Syed’s conviction should be overturned.

“The Lee family is not seeking, through this motion or through the appeal, to impact Mr. Syed’s release from custody,” said the family’s attorney, Steve Kelly. “If the wrong person has been behind bars for 23 years, the Lee family and the rest of the world want to understand what new evidence has led to that conclusion.”

Prosecutors moved to vacate Syed’s conviction on Sept. 14. That followed a yearlong investigation and was two days after they notified the Lee family, the family’s motion says. Then on Sept. 16, Syed’s attorneys and prosecutors discussed the motion at a meeting in Phinn’s chambers.

Phinn ordered a new trial, but prosecutors were given 30 days — until Oct. 18 — in which to dismiss the charges or proceed with a new trial.

Syed has always maintained his innocence. His case captured the attention of millions in 2014 when the debut season of “Serial” focused on Lee’s killing and raised doubts about some of the evidence prosecutors had used, inspiring heated debates across dinner tables and water coolers about Syed’s innocence or guilt.

Syed was serving a life sentence after he was convicted of strangling 18-year-old Lee, whose body was found buried in a Baltimore park.

Prosecutors said a reinvestigation of the case revealed evidence regarding the possible involvement of two other possible suspects. The two suspects may be involved individually or may be involved together, the state’s attorney’s office said.