BOWLING GREEN, Ohio (AP) — The family of a student who died from alcohol poisoning while pledging a fraternity sued Bowling Green State University on Thursday, alleging the Ohio school knew about but didn’t stop hazing in Greek life there and should be held responsible. 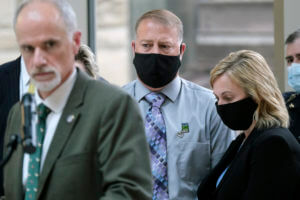 FILE – Cory and Shari Foltz, the parents of a Bowling Green State University student who died in an alleged hazing incident, look on while Wood County Prosecuting Attorney Paul Dobson, left, takes questions from the media at the Wood County Courthouse, April 29, 2021, in Bowling Green, Ohio. Three former fraternity members were sentenced Thursday, June 16, 2022, to jail terms for their roles in the hazing death of a Bowling Green State University student, while two others were ordered to serve house arrest. (J.D. Pooley/Sentinel-Tribune via AP, Fille)

The university characterized the death of 20-year-old Stone Foltz as a tragedy but called the family’s lawsuit meritless. In a written statement, BGSU spokesperson Alex Solis suggested the suit in the Ohio Court of Claims undermines the school’s efforts to eradicate hazing.

Foltz’s death already led to criminal convictions for several fraternity members and tougher penalties for hazing in Ohio. The university made changes, too, including hiring a hazing prevention coordinator and expelling the fraternity Foltz was joining.

His parents settled part of a wrongful death lawsuit against the fraternity and several of its members for $2.4 million.