NASHVILLE (WTVF) – The family of a Nashville father — who was shot and killed two weeks before his wedding day — still has no answers 10 years later.

Metro Nashville Police Department officers said on Jan. 27, 2012, around 8:45 p.m., Stephano Griffin, 26, was returning to his fiancé’s home on University Court when he was confronted by a man who had a gun. 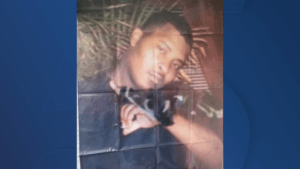 A photo of Stephano Griffin hangs in the front of his family’s home in La Vergne. (WTVF)

Witnesses reported hearing an argument, and the man shot Griffin multiple times. After Griffin fell to the ground, the suspect grabbed his jacket and pants and ran down the street. Detectives recovered Griffin’s clothing, and discovered he had also been robbed. He was rushed to Vanderbilt University Medical Center, but did not survive his injuries.

He left behind his 6-year-old son and a grieving family.

“He’s my first born,” said Delizanne Harbison, Griffin’s mother. “It’s like, it’s not true. I can’t believe it, you know?”

A large photo of Griffin has hung in the front of Harbison’s home for the last year. Griffin’s family also keeps his memory alive by celebrating his birthday and visiting his grave on the anniversary of his death. However, they said waiting 10 years to find out who killed him has been difficult.

“I just don’t want to be gone from here without knowing the truth,” said Harbison. “I’m just ready for closure.”

Metro Police said they believe dozens of people witnessed the shooting. In order for the case to move forward, they need those people to come forward and share information on what they saw.

“Often times people don’t like the police, or they don’t trust the police,” said Matthew Filter, a detective with the Metro Nashville Police Department’s Cold Case Unit. “In a situation like this, we’re there to try and help them. We’re trying to lock up a killer in their community.”

If you have any information about Griffin’s murder, you can call the Metro Police Department Cold Case Unit at 615-862-7803. You can also call Nashville Crime Stoppers at 615-74-CRIME.

This story was originally published Aug. 15 by WTVF in Nashville, an E.W. Scripps Company.