ST. PETERSBURG, Fla. — A murder-suicide investigation is underway after a 9-year-old boy and his father were found dead Monday morning.

The St. Petersburg Police Department said the mother of the 9-year-old attempted to pick up her son, who’d been spending the weekend with his father, at the Trellis at the Lakes Apartments complex on Sunday; however, the boy’s father did not respond to her calls or knocks on the door.

“This is just a very sad situation where you have a type of custody dispute between the parents. They have been having issues and so unfortunately, it looks like the father decided to take her son’s life and then kill himself,” said Yolanda Fernandez, St. Petersburg Police Public Information Officer.

Worried, the boy’s mother called St. Pete PD for a welfare check. When officers arrived, officers said there was no sign of foul play and neighbors hadn’t heard anything suspicious, and because the father and mother were estranged they had no legal reason to forcibly enter the apartment. 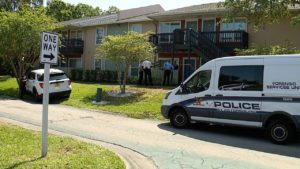 Police stand outside the Trellis at the Lakes Apartment Complex on Sunday, April 3. (WFTS)

On Monday, the mother returned and called the apartment manager for assistance. When the manager went into the apartment they made the tragic discovery and immediately called St. Pete PD.

“They discovered the father and the son. The father had shot his son and had killed himself. So at this point, a very sad situation where we have a deceased 9-year-old boy and his father, both dead here on the scene,” said Yolanda Fernandez with St. Pete PD. “Of course, this will have to be confirmed by the medical examiner, but there’s really no other sign of foul play of any kind.” 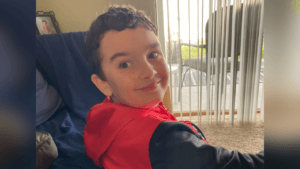 St. Pete Police are investigating after they say Andres Chateau, 9, was found dead on Monday morning along with his father in an apparent murder-suicide. (St. Pete Police via WFTS)

St. Pete PD shared a photo of Chateau, which was provided by his mother. Chateau, per St. Pete PD, lived in Pasco County with his mother and attended Innovation Academy.

The Crisis Center of Tampa said resources are available. People may contact 2-1-1 or The National Suicide Prevention Hotline at 1-800-273-8255 (TALK).

St. Pete PD said they are just beginning their investigation and still have a lot of work to do with forensics and family members to better understand what occurred. They told WFTS they understand there had been an eviction notice, but they don’t know if it had anything to do with what happened.

This story was originally published April 4 by WFTS in Tampa, an E.W. Scripps Company.