ORLANDO, Fla. (AP) — The father of a Missouri teenager killed after falling from a towering Florida amusement park ride said Monday that he fears his son’s death will be forgotten, with tragic consequences for future ride patrons.

Yarnell Sampson’s birthday Sunday — the same day as Juneteenth, the new national holiday marking the end of slavery in the U.S. — was the first time, he said, that he could talk to his son, 14-year-old Tyre Sampson, since the teen’s death. 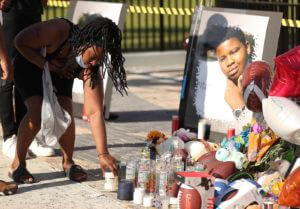 Family members and friends of Tyre Sampson leave items during a vigil in front of the Orlando Free Fall drop tower in ICON Park in Orlando on Monday, March 28, 2022. Sampson, 14, was killed when he fell from the ride late Thursday evening. (Stephen M. Dowell/Orlando Sentinel via AP)

“I refuse to let this thing go under the rug because my son didn’t deserve it,” Sampson said at a news conference next to the Free Fall ride in Orlando. “This is my celebration to be with my son.”

Unless there are safety changes on tower drop rides, he added, “somebody else is going to die. We’re choosing property over safety.”

Tyre Sampson, a football player and honor roll student from the St. Louis area, died of blunt force trauma after slipping out of his seat in March on the 430-foot (130-meter) ride.

An initial report by outside engineers hired by the Florida Department of Agriculture said sensors on the ride had been adjusted manually to double the size of the opening for restraints on two seats, resulting in Sampson not being properly secured. 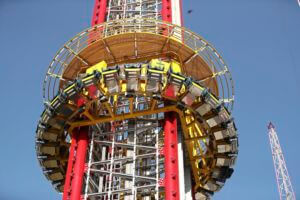 Civil rights attorney Ben Crump, who represents Yarnell Sampson in a lawsuit against the ride’s owner, manufacturer and landlord, said Tyre Sampson was visiting Orlando with friends on spring break when he died.

“Tyre was too big to have been on that ride. There is no question about that,” Crump told reporters. “These companies can’t get away with this putting profit over safety.”

State Rep. Geraldine Thompson, who also attended the news conference, said she is drafting a bill that would take a company’s safety history into account more closely when applying for permits to open such rides in the future. She said the company that operates Free Fall, Orlando Slingshot, wants to open a second ride similar to the one involved in Tyre Sampson’s death.

She noted that the flowers, stuffed animals and other mementos people left next to the ride where Tyre Sampson fell have all been removed.

“They don’t want people to know that,” Thompson said.

A spokeswoman for Orlando Slingshot said the company would comment later. Slingshot’s attorney has said it is cooperating with investigators and supports efforts to make amusement rides safer.

The lawsuit contends the ride was operated negligently and in an unsafe manner. The defendants failed to warn Sampson about the risks of someone of his size going on the ride and did not provide an appropriate restraint, the suit says.

The investigation into Tyre Sampson’s death is ongoing.

Yarnell Sampson said he preferred that the ride be dismantled and a permanent memorial erected to honor his son.

“This thing has been very emotional,” he said. “The light is justice for Tyre.”