MOAB, Utah (KSTU) — A double-homicide from mid-August remains unsolved roughly five weeks after the bodies of Kylen Schulte and Crystal Turner were found in the La Sal Mountains outside of Moab.

“I want everyone, I want the hikers, the bikers, the jeepers, I want everyone to think and double check your dashcam and remember the girls were missing on the 13th of August and found on the 18th of August, so lets focus on the mountain during those times,” said Sean-Paul Schulte, Kylen’s father who has been working each day trying to gather tips and information from community members. 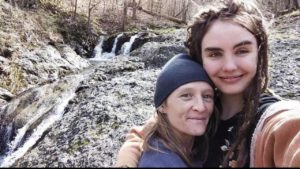 “All I did was just provide a venue for local folks to come down and tell me clues,” said Schulte, who has been taking tips and sharing them with authorities working the case. “Over two weeks, I’ve probably got 30 to 35 clues and you know, maybe only four or five of them were not really good clues.”

Married couple 24-year-old Schulte and 38-year-old Turner spent a lot of their time living out of their van and at local camping areas. They were found by one of their friends who went looking for them after they were reported missing. Grand County Sheriff’s Office investigators located the women at a campsite with multiple gunshot wounds on their bodies.

The developments of the case regarding Gabby Petito and Brian Laundrie drew comparisons due to the timing of both events that took place in Moab, which happened around the same time as the apparent murders of Schulte and Turner. However, the Grand County Sheriff’s Office shared a statement on social media, “It has been determined that the Gabby Petito missing person case is not related to the double-homicide case involving Crystal Turner and Kylen Schulte.”

“Unfortunately, they weren’t able to tie the two cases together which would cross multiple state lines and boom brought the FBI in right away but it was determined that the two cases weren’t linked, it seemed to me like they might be,” said Sean-Paul Schulte. “There was a timeline that they crossed over, they were both, Kylen and Crystal were missing while Gabby and Brian were here, so there timelines crossed over but I don’t know if any evidence did.”

KTSU reached out to the Grand County Sheriff’s Office for comment on the determination on the Petito/Laundrie timeline as well as an update on the investigation but received no forthcoming information.

If you have information to assist in this case you are encouraged to call Grand County Sheriff’s Office (435) 259-8115. If you do get an answer please leave a detailed message and an investigator will call you back.

This story was originally published September 22, 2021, by KTSU in Salt Lake City, an E.W. Scripps Company.