LOS ANGELES (AP) — Prosecutors have charged a man and his father in connection with three slayings in Southern California between 2014 and 2018.

Anthony Velasquez, 31, was charged Monday with three counts of murder along with allegations that he personally used a firearm in the killings of Jesus Antonio Avalos, Eduardo Robles and Amanda Nicole Lopez, ABC 7 reported. 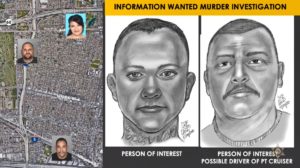 His father, 51-year-old Manuel Velasquez, was charged with one count of murder for Robles’ killing, two counts of being an accessory to the other two slayings and helping his son avoid arrest, the news station reported.

It was not immediately clear if the men had attorneys who could speak on their behalf.

Anthony Velasquez was held in lieu of $6 million bail, while his father’s bail was set at $2 million.

They were arrested last week. Los Angeles County sheriff’s investigators have not said what the duo’s motives were, but believe they had unspecified relationships with the victims.