WASHINGTON (AP) — The FBI has reached out to attorneys representing Olympic gold medalist Simone Biles and other women who were sexually assaulted by Larry Nassar to begin settlement talks in the $1 billion claim they brought against the federal government, according to three people familiar with the matter.

The FBI’s general counsel contacted the lawyers for Olympic gold medalists Biles, Aly Raisman and McKayla Maroney and dozens of other women on Wednesday. The FBI’s attorneys told the lawyers for the women that they had received the legal claims and the agency was “interested” in a resolution, including discussions about a potential settlement, the people said. 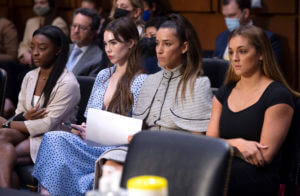 FILE – United States gymnasts from left, Simone Biles, McKayla Maroney, Aly Raisman and Maggie Nichols, arrive to testify during a Senate Judiciary hearing about the Inspector General’s report on the FBI’s handling of the Larry Nassar investigation on Capitol Hill, Sept. 15, 2021, in Washington. The FBI has reached out to attorneys representing Olympic gold medalist Simone Biles and other women who say they were sexually assaulted by Larry Nassar to begin settlement talks in the $1 billion claim they brought against the federal government, according to three people familiar with the matter. (Saul Loeb/Pool via AP, File)

The people could not discuss details of the negotiations publicly and spoke to The Associated Press on condition of anonymity.

John Manly, a lawyer who represents more than 90 victims, declined to comment when contacted earlier Thursday by the AP. The settlement talks were first reported by the Wall Street Journal.

The victims had brought claims against the FBI for failing to stop the sports doctor when the agency first received allegations against him. FBI agents in 2015 knew that Nassar was accused of assaulting gymnasts, but they failed to act, leaving him free to continue to target young women and girls for more than a year. He pleaded guilty in 2017 and is serving decades in prison.

Indianapolis-based USA Gymnastics told local agents in 2015 that three gymnasts said they were assaulted by Nassar, a team doctor. But the FBI did not open a formal investigation or inform federal or state authorities in Michigan, according to the Justice Department’s inspector general. Los Angeles agents in 2016 began a sexual tourism investigation against Nassar and interviewed several victims but also didn’t alert Michigan authorities, the inspector general said.

Nassar wasn’t arrested until the fall of 2016 during an investigation by police at Michigan State University, where he was a doctor. The Michigan attorney general’s office ultimately handled the assault charges against Nassar, while federal prosecutors in Grand Rapids, Michigan, filed a child pornography case. 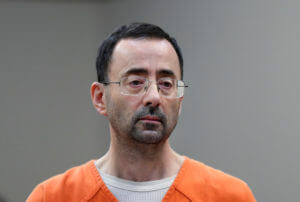 FILE – Dr. Larry Nassar, appears in court for a plea hearing on Nov. 22, 2017, in Lansing, Mich. The FBI has reached out to attorneys representing Olympic gold medalist Simone Biles and other women who say they were sexually assaulted by Larry Nassar to begin settlement talks in the $1 billion claim they brought against the federal government, according to three people familiar with the matter. (AP Photo/Paul Sancya File)

The Justice Department in May said that it would not pursue criminal charges against former agents who were accused of giving inaccurate or incomplete responses during the inspector general’s investigation. At the time, Justice officials said they were “adhering to its prior decision not to bring federal criminal charges” after a “careful re-review of evidence.”

The opening of settlement talks comes as senior Justice Department officials, including Assistant Attorney General Kenneth Polite, who runs the department’s criminal division, met with members of Congress about the case on Thursday. In that meeting with several senators, Polite and others presented proposals to change the law to close what officials see as gaps in the statute that had prevented a case from being brought.

But Polite would not give the lawmakers underlying evidence they had requested.

“The FBI again refused to provide underlying information to support their assumption that a jury wouldn’t convict their agents for botching the Nassar investigation, then trying to cover their tracks,” said Sen. Chuck Grassley of Iowa, the top Republican on the Senate Judiciary Committee. “It’s the latest example of the Department of ‘Just Us’ trying to avoid accountability for its failures.”

FBI Director Christopher Wray has acknowledged major mistakes and said what happened was “inexcusable.” The FBI later fired the supervisory special agent who had interviewed Maroney in 2015. The Justice Department’s inspector general had harshly criticized that agent and his former boss — the agent in charge of the Indianapolis office — for their handling of the allegations.

“I’m especially sorry that there were people at the FBI who had their own chance to stop this monster back in 2015 and failed, and that is inexcusable,” Wray said at a September 2021 congressional hearing. “It never should have happened, and we’re doing everything in our power to make sure it never happens again.”