ATLANTA (AP) — A man who was punched and kicked in the head by Georgia police officers during a traffic stop four years ago has filed a lawsuit alleging the stop was unjustified and the officers used excessive force against him.

Gwinnett County police Sgt. Michael Bongiovanni pulled Demetrius Hollins over in Lawrenceville, just outside Atlanta, on April 12, 2017. Video filmed by a witness shows Bongiovanni punching Hollins as Hollins stood with his hands raised after exiting his car. A second video shows Bongiovanni appearing to yell at a handcuffed Hollins, who then lies face-down in a left-turn lane of a busy intersection. Officer Robert McDonald runs up and immediately appears to stomp on Hollins’ head. 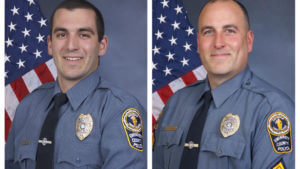 Hollins, who was 22 at the time of the traffic stop, said during a news conference Wednesday that he still has “some kind of PTSD from this situation.”

He filed the federal lawsuit earlier this month against Bongiovanni and McDonald, as well as former Gwinnett County police chief Butch Ayers and the county.

The lawsuit says Bongiovanni pulled Hollins over without justification and then retaliated with excessive force after Hollins began using his cellphone to record video of the encounter. It says McDonald knew Hollins was not a threat when he arrived on scene but still kicked Hollins in the head and held him down with a gun pressed to his head.

Both officers were fired the next day after video of the traffic stop surfaced and were subsequently charged with multiple crimes related to the stop. Working phone numbers for the two could not immediately be found Wednesday, and online court records did not list a lawyer for either man who could comment on the charges.

The lawsuit also says Ayers, now the executive director of the Georgia Association of Chiefs of Police, was aware that officers in his department routinely used “unnecessary physical force when making arrests and searches” and that he signed off on use-of-force reports even though supervisors had decided to close the cases without further investigation or inquiry.

It also says the county’s use of force procedure was unconstitutional because it “expressly authorized officers to use unnecessary, gratuitous, and disproportionate non-deadly physical force against citizens as a matter of routine procedure when making arrests and searches.” The county allowed unconstitutional policies and practices in use of force investigations, discipline, training and supervision to continue unchecked for nearly 20 years, the lawsuit says.

Ayers said in an email that he disagrees with many of the allegations in the lawsuit, but cannot comment further because the matter is under litigation. County attorney Mike Ludwiczak said the county does not comment on pending litigation.

As so often is the case in instances of police brutality, the officers were untruthful in their reports and the truth came out because video existed, said L. Chris Stewart, an attorney for Hollins. After this incident, he said, Gwinnett County prosecutors had to throw out dozens of cases because they could not rely on the reports filed by these officers.

“The people of Gwinnett County suffered because of these officers,” Stewart said.

Hollins was driving a red Acura Integra with no license plate and a brake light that did not work, and switched lanes three times without signaling, according to an incident report filed by Bongiovanni. The lawsuit says Hollins obeyed traffic laws, had two functioning brake lights and his vehicle tag was visible through the rear window.

The lawsuit says the original stop “was not supported by actual or arguable reasonable suspicion or probable cause” to believe he had committed a traffic offense or violated any other law. Even if the traffic stop had been justified, Bongiovanni acted “in an objectively unreasonable manner” in violation of Hollins’ rights, it says.

In nearly 20 years with the department, Bongiovanni had previously reported 67 use-of-force incidents. Only four were investigated and only because of formal citizen complaints, the lawsuit says. He was ultimately exonerated in all four.

Officers must file a report whenever they use physical force against a person, and supervisors are supposed to investigate that use of force to make sure it is justified and complies with department policy. But supervisors in the Gwinnett County police department routinely approved officers’ reports and closed the cases without any investigation, the lawsuit says.

Almost all of Bongiovanni’s prior use-of-force reports lacked sufficient information to determine whether they were justified, the lawsuit says. Additionally, Bongiovanni and McDonald had a history of using excessive force when responding to calls together, the lawsuit says.

The lawsuit, which was filed Sept. 10, asks for a jury trial and seeks compensatory and punitive damages, as well as attorneys’ fees and legal expenses.