WASHINGTON (AP) — The California man accused of plotting to kill Supreme Court Justice Brett Kavanaugh had an expansive goal to change the makeup of the Supreme Court “for decades to come,” according to a recent court filing that cites discussions the man had online.

Nicholas John Roske, 26, told unidentified internet users that his goal was to reverse the then-leaked draft decision of the since-overturned Roe v. Wade decision, according to an affidavit for a search warrant in the case, filed in Maryland federal court this week. 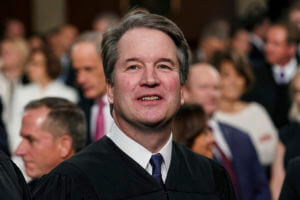 FILE – Supreme Court Associate Justice Brett Kavanaugh watches as President Donald Trump arrives to give his State of the Union address to a joint session on Congress at the Capitol in Washington, Feb. 5, 2019. Nicholas John Roske, the California man accused of plotting to kill Supreme Court Justice Brett Kavanaugh, had a more expansive goal to change the makeup of the Supreme Court in discussions he had in online chat rooms, according to a recent federal court filing. (Doug Mills/The New York Times via AP, Pool, File)

Killing one jurist could change the decisions of the court “for decades to come,” authorities said that Roske wrote, adding, “I am shooting for three.”

Roske explained that “all of the major decisions for the past 10 years have been along party lines so if there are more liberal than conservative judges, they will have the power.”

The details represent the newest indication that Simi Valley, Calif., man wasn’t focused solely on Kavanaugh, although it does not identify the other justices.

According to the filing, first reported by The Daily Beast, Roske’s cellphone history in May and June of this year included searches for “quietest semi auto rifle,” “Reagan assassination attempt,” “most effective place to stab someone,” “assassin skills,” “assassin equipment,” “assassinations,” “supreme court” and “how to be stealthy.”

Roske is charged with attempting to murder a justice of the United States. He has pleaded not guilty, and a tentative trial date has been set for next month.

Prosecutors say Roske traveled from California to Kavanaugh’s home in Chevy Chase, Maryland, with the intent of killing him. Roske pulled up near the home in a taxi shortly after 1 a.m. on June 8 carrying a suitcase with a gun and ammunition, a tactical chest rig with pepper spray and a knife, a flashlight, a laser, a thermal monocular and other burglary tools, according to court papers.

Spotted by two U.S. Marshals who were part of 24-hour security provided to the justices following the leak of the draft opinion, Roske was apprehended after he called 911 and told a police dispatcher that he was near Kavanaugh’s home and wanted to take his own life.

The leaked opinion draft led to protests, including at several of the justices’ homes. Roske’s arrest spurred the House to approve a bill expanding that around-the-clock security protection to the justices’ families.