VERO BEACH, Fla. (WPTV) — The parents of a 3-year-old girl who was found wandering naked in Vero Beach have been arrested and charged with child neglect.

According to the arrest report, officers responded to the 2200 block of 18th St. Wednesday, shortly before 1:15 p.m., in reference to a little girl walking around the neighborhood naked and unsupervised. 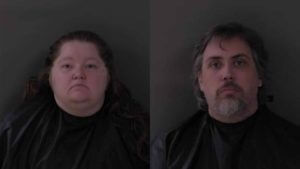 A man told officers that he spotted the little girl walking alone in front of his residence and rushed to help the child before calling law enforcement.

A couple of construction workers told officers they recalled seeing the little girl leaving her home alone earlier that day.

Officers were able to locate the parents of the child, Michael Slosson, 38 and Chrystal Slosson, 38, at their residence.

According to the report, another child, 9, also lives in the home.

The couple stated the little girl could have escaped through a window after she was put to bed for a nap.

The report said that during the investigation officers spotted one bedroom with the window open and the screen off. The bedroom had a bad odor. Feces were smeared on the walls and trash was spread on the ground.

The Florida Department of Children and Families and crime scene investigators were notified of the incident and responded to the scene.

DCF investigators walked through the residence and reported seeing dirt covering all rooms and a strong odor of urine and feces. The children’s mattresses were also covered in urine.

Following the investigation, DCF decided the children should be removed from the home. They are now in DCF’s custody.

A dog was also removed from the home by an Animal Control officer.

The couple was arrested and charged with two counts of child neglect.

They were transported to the Indian River County Jail without incident.

This story was originally published July 28 by WPTV in West Palm Beach, an E.W. Scripps Company.