FORT LAUDERDALE, Fla. (AP) — The Broward County, Florida, school district will pay more than $26 million to the families of 17 people killed and some of those injured in the 2018 Valentine’s Day massacre at Marjory Stoneman Douglas High School.

Board members approved the two legal settlements on Tuesday. 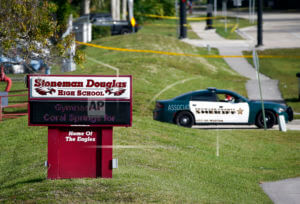 FILE- Law enforcement officers block off the entrance to Marjory Stoneman Douglas High School Feb. 15, 2018 in Parkland, Fla., following a deadly shooting at the school. The families of most of those killed in the 2018 Florida high school massacre have settled their lawsuit against the federal government. Sixteen of the 17 killed at Marjory Stoneman Douglas High in Parkland had sued over the FBI’s failure to stop the gunman even though it had received information he intended to attack. The settlement reached Monday, Nov. 22, 2021 is confidential. (AP Photo/Wilfredo Lee, File)

A total of $25 million will be shared by 51 plaintiffs, including families of the 17 dead as well as students and staff who were injured at the Parkland school. The families also reached a settlement with the FBI last month that will pay them over $127 million for its failure to possibly prevent the attack.

The district will also pay $1.25 million to Anthony Borges, who suffered some of the most severe injuries. His lawyer split off from the larger case, saying Borges will have a lifetime of expensive medical needs, according to the South Florida Sun Sentinel.

The Florida Supreme Court ruled in 2020 that state law capped the district’s total liability at $300,000, but the district agreed to go beyond that limit. Since the shooting, two family members of those killed have been elected to the school board: Debbi Hixon, whose husband Chris Hixon was the athletic director, and Lori Alhadeff, the mother of 14-year-old Alyssa Alhadeff. Neither took part in the negotiations or vote.

“While we recognize no amount of money can make these families whole, it is the school board’s hope that this settlement will show our heartfelt commitment to the MSD families, students, staff, faculty and to the entire Broward County community,” said Marylin Batista, the board’s interim general counsel.

Stand With Parkland, the group that represents the victims’ families, said its goal has been to hold accountable those they believe could have stopped the shooter, an expelled student with a long history of mental and emotional problems. Two students have said their warning to a school administrator that he could attack were dismissed.

“Our families will never be whole again, and there is no definitive value you can put on the lives of our loved ones who were taken from us,” the group’s statement said, but the settlement “at least affords our families some degree of closure in what has been a years-long legal battle.”

The estates of the dead will get about $1 million each from the school district, and 16 people who were injured will receive from $345,000 to about $777,000. Nineteen others who suffered trauma will receive $22,800. Payouts will be made in three installments.

The FBI settled last month with 16 of the 17 people killed and some of those wounded over its failure to investigate a tip it received weeks before the massacre that the shooter, Nikolas Cruz, had bought guns and planned to “slip into a school and start shooting the place up.”

“I know he’s going to explode,” the caller to an FBI tip line said.

But that information was never forwarded to the FBI’s South Florida office and Cruz was never contacted.

Cruz, 23, pleaded guilty in October to murder and attempted murder. A trial next year will determine whether he will be sentenced to death or life in prison without parole.