When Georgia authorities pulled over a Florida driver during the weekend, they made a gruesome discovery in the back of the truck — the body of his decomposing wife. Casei Jones and her four children had been missing from their Florida hometown for over a month, and the discovery set off a massive search for the children. 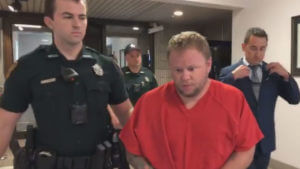 The bodies have now been found — though authorities won’t say where — and Michael Jones, 38, has been returned to Florida for prosecution. Judge Robert Landt in Marion County, Florida, ordered Jones held without bond Thursday.

“True evil poked its head up here in Marion County. That’s the only way to describe it,” Marion County Sheriff Billy Woods said during a news conference after announcing the children’s bodies had been found.

Jones has been charged with 2nd degree murder in his wife’s death. Authorities suspect he killed all five members of his family at the mobile home where they had been living in Summerfield, Florida, said Kayla Welch, a spokeswoman for the Marion County Sheriff’s office.

The sheriff’s office said Jones, who is on suicide watch, is also suspected of killing the children: Cameron Bowers, 10; Preston Bowers, 5; Mercalli Jones, 2; and Aiyana Jones, 1. Additional charges are pending in their deaths.

Casei Jones’ family reported her and her four children missing Saturday night. Nikki Jones said she hadn’t seen or heard from her daughter and grandchildren for nearly six weeks and was concerned for their wellbeing, according to an arrest report.

When deputies searched the home for the family, they noticed it had been vacant for several weeks and “had the foul odor of decomposition.” They quickly realized it was a likely crime scene, according to an arrest report from Florida authorities.

Sheriff Woods said his deputies put out a blast for authorities across the country to be on the lookout for Michael Jones. Police in Brantley County, Georgia, pulled his truck over Sunday night.

“He was found in Brantley and gave himself up pretty quickly when he was pulled over,” Sheriff Woods said. “The mother’s body was found in the vehicle.”

The sheriff would not say where they found the children’s bodies or how the family was killed. The autopsies were conducted in Georgia, but the medical examiner there referred questions to Florida authorities.