ROCKLEDGE, Fla. (WPTV) — A St. Lucie County mother found dead earlier this year in a vehicle with her twins, killed her children before taking her own life, according to a report by the Brevard County Medical Examiner’s Office.

Andrea Langhorst, 35, Olivia Dryer and Adam Dryer, both of whom were 3 years old, were found dead March 20 in a vehicle parked at an apartment complex in Melbourne. 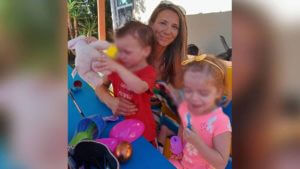 The mother and the twins, who were from Fort Pierce, had not been seen alive in 11 days before their bodies were found.

The medical examiner found that Langhorst died by suicide from methamphetamine and cocaine intoxication.

Her two children’s deaths were both caused by methamphetamine and ruled homicides, the report stated.

The medical examiner said neither child had any external trauma or any sign of physical abuse.

Langhorst was found sitting in the driver’s seat of the vehicle while her two children’s bodies were seated in the back seats.

The woman’s father, Randy, spoke to WPTV in March and said his grand twins were his daughter’s “pride and joy.” He said he was shocked and devastated after hearing about the deaths.

A GoFundMe page was established shortly after the deaths to help “family members that are in need of grief support services.” It had raised $1,435 by Tuesday.

This story was originally published June 7 by WPTV in West Palm Beach, an E.W. Scripps Company.