A Florida woman is behind bars after she reportedly confessed to killing her 81-year-old mother in their home. 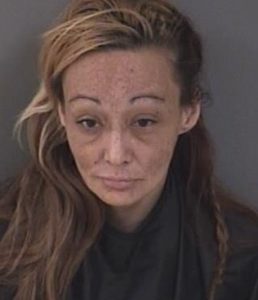 Crystal Marie Williams, 38, is accused of murdering Carmelina Kohler on March 9 in Vero Beach.  Crystal told authorities she was helping move boxes when Carmelina “made a comment that sent (her) into a rage,” according to an arrest affidavit. The two argued for a few minutes before Crystal allegedly killed Carmelina. The victim’s body was later found hidden in the garage under blankets and boxes. Authorities said she had suffered multiple stab wounds.

Carmelina was reported missing by her husband that night. When police arrived, he told them he last saw his wife around 11:00 a.m. before heading to a doctor’s appointment. When he got home around 1:30 p.m., Crystal was alone at the house instead of with Carmelina at a 2:00 p.m. nail appointment. She reportedly told him Carmelina had sent her to change because she “looked like a bum,” then drove off in her mother’s van.

Crystal’s ex-boyfriend later told authorities she showed up at his home distraught around 4:30 p.m. When he asked what was wrong, she said, “the less he knew the better.” The pair then went to Walmart where he gave her $120 in cash. She reportedly told him she was thinking about heading to Tennessee. When Indian River County investigators contacted her that night, she told them she knew her mother was missing and had last seen her at 2:00 p.m. when Carmelina dropped her off at Fort Pierce Marina to visit her ex-boyfriend.

In the overnight hours, police say Crystal eventually confessed to killing her mother but did not provide details. She was booked on a charge of First-Degree Murder.