BOISE, Idaho (AP) — A former Idaho lawmaker was convicted Friday of raping a 19-year-old legislative intern after a dramatic trial in which the young woman fled the witness stand during testimony, saying “I can’t do this.”

The intern told a Statehouse supervisor that Aaron von Ehlinger raped her at his apartment after the two had dinner at a Boise restaurant in March 2021. Von Ehlinger said the sex was consensual. 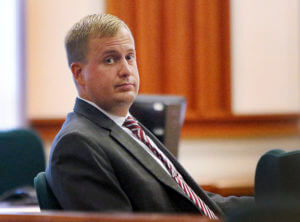 At the time, the Lewiston Republican was serving as a state representative, but he later resigned.

Von Ehlinger, 39, was found guilty Friday of rape. He was found not guilty of sexual penetration with a foreign object.

Von Ehlinger sat calmly as the verdict was read, as he has throughout the trial.

Afterward, 4th District Judge Michael Reardon told the jury: “This has been an unusual case attended by many unexpected circumstances, but I appreciate your attention … and hard work.”

A felony rape conviction carries a minimum sentence of one year in prison in Idaho. The maximum penalty can be as high as life in prison, at the judge’s discretion. Sentencing has been scheduled for July 28.

As von Ehlinger was remanded into custody and handcuffed, he talked quietly with his attorney who removed items from von Ehlinger’s pockets.

The prosecution remained stoic as they left the courtroom, but once they reached a lower floor they stopped to briefly to congratulate each other on the verdict. 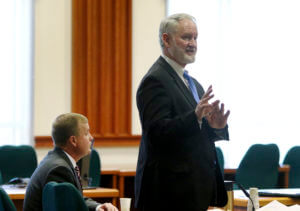 Von Ehlinger’s attorney, Jon Cox, could not be immediately reached for comment after the trial.

In a press conference, Ada County Prosecuting Attorney Jan Bennetts thanked the jury, investigators and the prosecutors who handled the case.

“Last but not least, it took an incredible amount of courage for the victim in this case, Jane Doe, to come forward,” Bennetts said. “I want to acknowledge the courage that she took in coming forward.”

Doe testified on the second day of the trial. She haltingly described the moments the alleged assault began, before abruptly leaving the witness stand.

“He tried to put his fingers between my legs and I closed my knees,” Doe said. 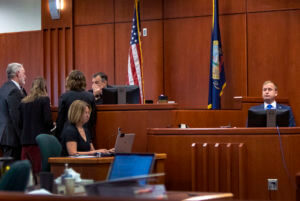 The judge gave the prosecuting attorneys 10 minutes to find her to determine if she would return and resume her testimony.

When she did not, the judge told the jurors they had to “strike (Doe’s testimony) from your minds as if it never happened,” because the defense could not cross-examine her.

During the press conference, Deputy Prosecuting Attorney Katelyn Farley said the moment Doe left the trial was “heart-wrenching,” but said she and deputy prosecutor Whitney Welsh had prepared for trial knowing that Doe may not be able to testify.

During his testimony Thursday, von Ehlinger often spoke in a clear, loud voice directly to jurors, saying he and Doe decided to return to his apartment to “hang out” after eating at a fancy Boise restaurant. Then they began making out on the couch, he said.

“Things were going well, and I asked (Doe) if she would like to move to the bedroom,” von Ehlinger said. “She said ‘Sure.’ We got up, held hands and walked into the bedroom.”

Deliberations stretched for seven hours until nearly 8 p.m. Thursday before the jury decided to break for the evening. At one point, the judge summoned the attorneys to his chambers because the jury asked a question. No details were made public about the jury’s inquiry.

When the allegations became public — largely because of the legislative ethics investigation — Doe faced unrelenting harassment from some of von Ehlinger’s supporters. Her name, photo and personal details about her life were repeatedly publicized in “doxxing” incidents. One of the people who frequently harassed her was in the courthouse to attend the trial, but law enforcement banned the man from the floor where where case was being heard.

During closing arguments, Farley told jurors that the case was about “power in the wrong hands” used to the “great devastation” of Doe. Von Ehlinger had social, political and physical power over the petite intern, Farley said.

“He used that power to rape and forcibly penetrate her,” Farley said, pointing at von Ehlinger. Doe resisted in several ways, she said, highlighting the testimony of law enforcement investigators and a nurse sexual assault examiner who interviewed Doe after the alleged assault.

But von Ehlinger’s attorney told jurors the prosecution’s case was made up of “red herrings,” and said von Ehlinger was a credible person who willingly took the stand to share his side of the story.

Earlier this week, jurors heard from investigators and a nurse who performed a rape exam. They testified that Doe reported being pinned down while von Ehlinger forced her to perform oral sex, and that she knew he frequently carried a handgun and had placed it on a dresser near the bed at the time of the assault. A nurse also testified that Doe had a “goose egg” on the back of her head from striking the wall or a headboard while trying to jerk her head away from von Ehlinger’s grip.