Aaron von Ehlinger, 39, has pleaded not guilty to felony charges of rape and sexual penetration with a foreign object and maintains he had consensual sex with the woman. 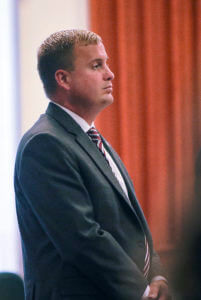 Former Idaho State Rep. Aaron von Ehlinger stands as the jury enters the courtroom after a break during the second day of testimony in his rape trial at the Ada County Courthouse, Wednesday, April 27, 2022, in Boise, Idaho. (Brian Myrick/The Idaho Press-Tribune via AP, Pool)

He resigned from the House of Representatives last year after a legislative ethics committee recommended that he be banned from the Statehouse.

Doe was a 19-year-old intern when she told her supervisors that von Ehlinger, who was then a Republican representative from Lewiston, raped her in March 2021 at his Boise apartment after the two had dinner at a restaurant.

Both charges carry a maximum penalty of up to life in prison.

Before von Ehlinger took the stand, Judge Michael Reardon rejected a motion from the defense attorney suggesting von Ehlinger should be acquitted on all charges.

The lawyer, Jon Cox, said there wasn’t sufficient evidence — based on the statements that Doe made to Anne Wardle, the nurse who examined the intern after the alleged rape — that she adequately resisted von Ehlinger’s advances.

“I would submit that there’s no testimony from Ms. Wardle that (Doe) did nothing other than make excuses for why she didn’t want to do it,” Cox said. “I don’t think that rises to the level of being against her will — she didn’t say, ‘Don’t do that, I don’t want that.’”

But Ada County Deputy Prosecutor Katelyn Farley said Cox was mischaracterizing the testimony, noting that Wardle and investigators testified that Doe told them she said no.

Farley also said the testimony showed that von Ehlinger was much bigger than Doe, carried a gun, physically pulled her onto a couch and carried her into the bedroom and that she resisted in several ways.

The judge rejected that motion and referred to additional testimony from Wardle.

“As I have heard the evidence it appears to me there is sufficient evidence of use of force — statements about her jerking her head back and hitting the wall causing an appreciable bruise,” Reardon said.

The judge gave the prosecuting attorneys 10 minutes to find her to determine if she would return and resume her testimony.

When she did not, Reardon told the jurors they had to “strike (Doe’s testimony) from your minds as if it never happened,” because the defense could not cross-examine her.