BOISE, Idaho (AP) — A former Idaho lawmaker convicted of raping a 19-year-old legislative intern has been sentenced to 20 years in prison for the crime.

Aaron von Ehlinger must serve at least eight years before he will be eligible for parole, 4th District Judge Michael Reardon said during the sentencing hearing on Wednesday. 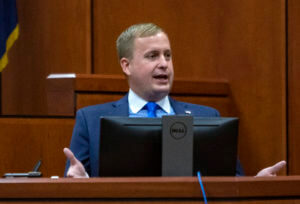 Von Ehlinger was convicted of felony rape in April, roughly a year after he resigned from his seat in the House of Representatives after an ethics committee recommended that he be banned from the statehouse.

The judge said von Ehlinger failed to show empathy or remorse, and that it was clear he was not ready for sex offender treatment. The sentence would at least deter von Ehlinger from committing another crime while he is incarcerated, Reardon said.

“You have a pattern of explaining, excusing, deflecting and blaming others for the circumstances you find yourself in,” Reardon said.

The investigation into von Ehlinger’s actions began in March 2021 after the intern told a statehouse supervisor that the Republican from Lewiston raped her at his apartment after the two had dinner at a Boise restaurant. Von Ehlinger has maintained the sex was consensual.

Doe attending the sentencing hearing, and during the proceeding the prosecutor played a recording of Doe talking about how the rape and its aftermath left her traumatized.

In the recording, Doe described how her autonomy was “ripped violently away.” She sometimes experiences panic attacks just from hearing von Ehlinger’s name, she said, and has had to install security systems and cameras outside her home. Von Ehlinger’s supporters publicized Doe’s name, photo and personal details about her life after she reported the rape, and repeatedly harassed her.

Doe said she was taking a stand “for the future of any Jane and John Doe here in Idaho.”

“I am here now. I am here scared, I am here frightened, I am so petrified, but I will not be intimidated into silence so that another rapist can slip through the cracks of this justice system,” Doe said in the recording. “I hope he rots in pieces behind those cold metal bars.”

Von Ehlinger reminded the judge that he served as a paratrooper in the Afghanistan war, and said that he was trained in the military to protect people, especially women.

“We were trained to fight against evil and fight for those who cannot fight for themselves, especially women. That is something I believe then and something I absolutely believe now,” von Ehlinger said.

He later continued, “The only thing between Afghani women and the middle ages was the American soldier and I am very proud that we were able to do that.”

He also said that he went on a pilgrimage to Israel, Jordan and Egypt before his trial.

“I was ultimately baptized in the Jordan River,” von Ehlinger said, but was first required to confess his sins. “I confessed a lot of sins your honor — I am not a perfect man — but rape was not a sin that I could confess to. It would be sin to confess to something that I did not commit.”

But the judge said von Ehlinger demonstrated a lack of empathy for the victim and had a propensity to blame her.

The judge also ordered von Ehlinger to register as a sex offender and placed him under a no-contact order lasting through 2055.