Wilford Jenkins was initially charged with murder but took a plea deal Thursday and will serve his sentence on involuntary manslaughter, felonious assault and tampering with evidence charges. 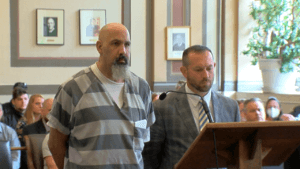 In October 2021, Wilford Jenkins waited for his wife, Huletta Jenkins, to return to their home on Bessinger Drive and then stabbed her multiple times with a knife, according to court records. She had stab wounds on her chest, arms, neck and abdomen.

Medical records show she died from a slice across her throat. She had bone fragments missing from her spinal cord, indicating that he was trying to decapitate her, the coroner said.

Wilford then tried to kill himself with the knife but failed.

According to court records, the power to the home’s Ring doorbell was shut off before the attack.

Wilford apologized while holding back tears.

It’s an apology Huletta’s mother, Roxanna Smith, would not accept.

“The only remorse you have is that you got caught,” she said during her victim impact statement. “Why didn’t you just leave and let her live?”

Wilford will not be eligible for early release.

This story was originally published July 7 by WCPO in Cincinnati, an E.W. Scripps Company.