LAS VEGAS (KTNV) — During the height of the pandemic when stay at home orders were in full effect and you couldn’t walk into a restaurant, a McDonald’s customer got a nasty surprise after visiting a drive-thru — an employee had spit in her drink. This week, police finally made an arrest.

Felicia O’Neal, 49, was pulled over for driving without headlights on July 4 when police discovered a warrant for her arrest that had been issued a year ago.

The former McDonald’s worker is charged with adulterating food in the wake of KTNV’s February 2021 investigation.

“This actually happens to people. It happened to me!” customer Cynthia Baer told KTNV in an exclusive interview last year.

Baer had visited the drive-thru of her local McDonald’s, an independently owned franchise in Las Vegas, in December 2020 to treat her kids to some fries and a strawberry shake. 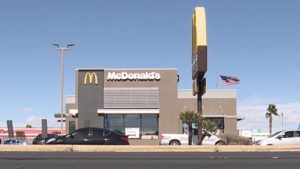 “And I like to get a coffee,” she added.

Baer ordered an iced sugar-free French vanilla latte. But that day, her usual drive-thru experience turned out to be anything but.

“She (the employee at the drive-thru) cut me off halfway through my order, and I said, I’m not done ordering. I want to still order my drink. And she goes, well, it’s too late to order.”

Baer asked to speak with a supervisor, “And he said he would take care of it and to pull forward and they would get my order. And then they said — which I thought was curious — your drink’s not ready so you need to go to the third window.”

Curious, but not yet concerned, she drank the iced coffee only to get a nasty surprise when she was nearly finished.

“When I felt that texture — it’s a slimy, jelly-like texture in your mouth. And you know what that is and it’s definitely not coffee. I could see there was a lot more in the bottom of the cup and it was a pretty large amount that was in my mouth.”

Baer’s coffee contained mucous and saliva she believed came from Felicia O’Neal, the McDonald’s employee she had words with at the drive-thru.

“To me it’s like a threat on your life. It really is.”

At the time of incident in Dec. 2020, “We’re all walking around wearing masks, social distancing, not going to school, working from home, and this person has the audacity to spit directly into something that you’re going to drink. It is so dangerous.”

An insurance adjuster working for McDonald’s in a phone call recorded by both sides told Baer about the surveillance video of the incident.

“The angle’s not very clear but she acknowledged it, so to me, video or not, she said she did that,” the insurance agent said.

“I felt violated!” Baer exclaimed. “I felt absolutely violated and I had concern about what you could potentially get from ingesting someone’s spit. Here you have a frontline restaurant worker who is choosing to be reckless … knowing they are at a very high risk for COVID.”

“I realized that I was having symptoms from COVID. I got very sick, got tested and it was positive.”

When KTNV’s report first aired, McDonald’s told the station that no one was available for an on-camera interview.

The franchise owner sent a statement which says, in part:

“When we learned of the incident, we took the appropriate steps necessary to investigate the matter and immediately contacted local health authorities. The employee in question is no longer with our organization… We have apologized to the customer… in this unacceptable incident and are taking action to ensure that this doesn’t happen again.”

The next court date in the case is July 18.

This story was originally published July 5, 2022 by KTNV in Las Vegas, an E.W. Scripps Company.