CLEVELAND (WEWS) — A former Ohio jail director has been sentenced to jail after he was found guilty of four misdemeanor counts of falsification and dereliction of duty.

Investigators said he lied to the Cuyahoga County Council about his role in blocking the hiring of nurses inside the jail, leading up to the string of eight inmate deaths in the last six months of 2018. A ninth person died in 2019. 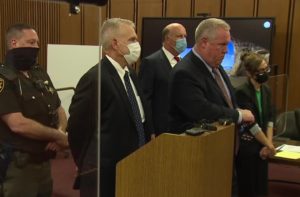 Mills eventually resigned in November 2018, days before the release of the US Marshal’s report that called conditions inside the jail “inhumane.”

During Mills’ sentencing, family members of some of the victims gave heartfelt, emotional statements about how their lives were forever changed.

The first to speak was Wendy, the sister of Gregory Fox who was 36 years old when he hung himself in his cell with a sheet wrapped around his neck.

According to a lawsuit filed in 2019 by his family, staff “failed to provide Gregory with necessary mental health care and medication and failed to take necessary steps to prevent his suicide.”

“Life will never be the same again. I’m angry and I’m hurt and disappointed and broken-hearted that Greg suffered in a facility by Cuyahoga County with individuals who were supposed to be smart, educated, hardworking and privileged,” Wendy said.

Another impact statement came from the son of 47-year-old Joseph Arquillo, who died from an overdose while in Cuyahoga County Jail. Former jailer Martin Devring, who pleaded guilty in connection to the incident, kicked a mat next to where Arquillo was having an overdose.

His son, Joseph Arquillo Jr., said he has watched the video over and over again of his father lying motionless on a mat while having an overdose.

“It’s ingrained in my mind. And each time, my heart breaks knowing that I get to see, I see his clear and obvious pain that could have been prevented,” he said.

A third impact statement was read by prosecutors on behalf of Chantelle Glass, who was restrained in a chair while she was peppered spray by a corrections officer. She came into the jail for a misdemeanor warrant.

“The officers and nurse did nothing to protect my modesty or prevent male staff and inmates from viewing my exposed body as they wheeled me around in the chair. They made me sit for hours in a cold room tied in the chair, covered in pepper spray. I couldn’t see. I couldn’t breathe. I thought I was going to die. Even once they let me out of the chair, I was left in my street clothes and denied a shower for the entire time. I was there two days in all because I got hauled into the county jail for an old traffic ticket,” she said in a letter read by a prosecutor.

Glass said the incident was triggered when she asked for a phone call.

“I’m an average mom who wasn’t doing anything wrong when I got arrested. I had no idea that our county ran a jail where the officers would torture people for asking to use the phone,” Glass said.

Before she handed down the sentence, Judge Cosgrove pointed to Mills as an example to say that no one person is all good or all bad, but said one aspect of the case that struck her was the public service component of it. She told the court, “It’s a privilege to serve the people of the state of Ohio and the citizens of Cuyahoga County.”

She went further to re-highlight the horrific conditions that happened in the county jail. She spoke about the individuals held inside the jail and how they all have two things in common: 99% of them are awaiting trial and are innocent until proven guilty and secondly, they are human beings.

“Whether or not they are charged with the most grievous crimes — murder, rape, robbery or a low-level drug offense. They’re still human beings, and they are entitled to be sentenced to a facility that has clean water, running water…You know, we are in the United States of America. We’re not a third world country,” Judge Cosgrove said.

During sentencing, Judge Cosgrove told Mills, “The damage to the reputation of Cuyahoga County and even the correction officers cannot be underestimated. What you have done is unthinkable. It’s callous. It’s indifference. I don’t know how you can live with yourself. Look at yourself in the mirror.”

This story was originally published October 8, 2021, by WEWS in Cleveland, an E.W. Scripps Company.