STILLWATER, Okla. (AP) — A former Stillwater Junior High School history teacher and coach who helped organize the teacher walkout in 2018 has been sentenced to prison for engaging in sexual communication with a minor.

Alberto Morejon, 28, was sentenced Friday to ten years after pleading guilty to engaging in sexual communication with a minor by use of technology. Morejon will serve the first five years in prison and the last five years on probation, said his attorney, Irven Box. 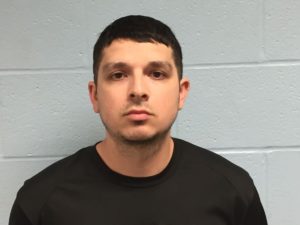 Box said Morejon likely will serve less than three years in prison since the crime is not one that requires 85% of the sentence to be served
Morejon was arrested last May after an investigation that began when a child’s mother contacted police about a possible relationship with her child’s former teacher.

“In this case, Morejon used his relationship with and knowledge of this victim from their student/teacher relationship to establish this illegal relationship,” Payne County District Attorney Laura Thomas said in a statement.

Morejon will also be required to register for 25 years as a sex offender, Thomas said.

In 2018, Morejon launched a teacher walkout page on Facebook that quickly reached more than 70,000 followers and became an online meeting place for teachers during the walkout. The education movement resulted in a slight philosophical shift in the Republican-controlled Legislature, which passed a historic package of tax increases that led to big boosts in public school funding and teacher pay raises.