PARIS — Officials in the Brittany region of France have reportedly arrested a fan wanted in connection with a massive crash at the Tour de France.

The fan held up a large cardboard sign while stepping out into the path of oncoming cyclists on Saturday, the first day of the multi-day race. Video of the race shows the woman was looking toward cameras and away from the pack of riders.

Her sign read “go grandma and grandpa” in French.

The sign hit one of the riders near the front of the pack. The cyclist fell, leading to more crashes as riders behind him fell. 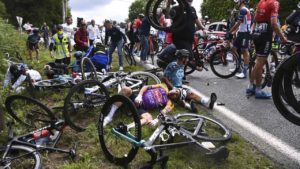 Italy’s Kristian Sbaragli, left, and France’s Bryan Coquard, right, lie on the ground after crashing during the first stage of the Tour de France cycling race over 197.8 kilometers (122.9 miles) with start in Brest and finish in Landerneau, France, Saturday, June 26, 2021. (Anne-Christine Poujoulat, Pool Photo via AP)

The crash was significant, taking down or slowing down dozens of riders. The race was held up for several minutes as bicycles and people were detangled.

The Finistere gendarmerie, law enforcement for that region, posted on Facebook over the weekend calling for witnesses to help track down the woman.

The organization that runs the Tour de France has made a formal complaint to authorities about the crash, according to CNN.

At least three riders have withdrawn from the race following Saturday’s crash.

The identity of the woman has not been publicly shared.

France Bleu Finistere radio said the woman arrested by gendarmes in the Finistere region of the country.

The station cited a source close to the probe.

This story was originally published June 30, 2021, by WTXL in Tallahassee, Fla.