ATLANTA (AP) — The mother of a Black man pursued and killed by white men who said they suspected him of a crime says she is “thankful, very thankful” that Georgia has repealed its Civil War-era citizen’s arrest law.

Wanda Cooper-Jones, the mother of Ahmaud Arbery, spoke Monday after Gov. Brian Kemp signed House Bill 479, which says bystanders can no longer make an arrest in Georgia if a crime is committed in their presence.

“I think the signing of this bill will make people think before they take action into their own hands,” Cooper-Jones said. “Unfortunately we had to lose my son in this manner. Had this bill been in place, I think it will protect young men as they are jogging down the street.” 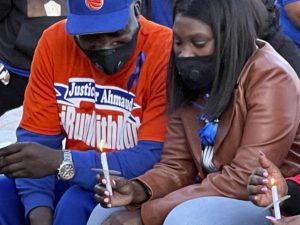 Wanda Cooper-Jones holds a candle for her son, Ahmaud Arbery, accompanied by her brother, Imus Holmes. at the New Springfield Baptist Church in Waynesboro, Ga., on Tuesday, Feb. 23, 2021, marking the one year anniversary of Arbery’s death in Brunswick, Ga. White men armed with guns pursued and killed Arbery, who is Black, as he ran through their neighborhood. (AP Photo/Lewis M. Levine)

The law is a continuing reaction to Arbery’s death, which was recorded on video by one of three men now charged with murder. The outcry over the shooting also pushed lawmakers last year to pass a new hate crimes law in Georgia, more than 15 years after the state Supreme Court overturned an earlier law.

“This bill makes Georgia the first state in the country to repeal its citizen’s arrest statue,” Kemp, a Republican, said before signing the measure. “Today we are replacing this Civil War-era law, ripe for abuse, with language that balances the sacred right of self-defense of person and property with our shared responsibility to root out injustice and set our state on a better path forward.”

Those who had long pushed for the repeal said the law was approved in 1863 to round up escaped slaves and was later used to justify the lynching of African Americans. Some other states are now also considering repealing such laws.

Arbery, then 25, was fatally shot while running through a neighborhood near Brunswick on the Georgia coast in February 2020. His 27th birthday would have been days ago, and Cooper Jones said she viewed the law as a birthday present to her son.

The father and son who pursued Arbery — Greg and Travis McMichael — weren’t arrested or charged until the state took over the case more than two months after the shooting. A prosecutor initially assigned to the case had cited Georgia’s citizen’s arrest law to argue that the shooting was justified. Lee Merritt, the family attorney, said Arbery’s relatives continue to want to see that prosecutor criminally charged.

Defense lawyers said the McMichaels pursued Arbery suspecting he was a burglar, after security cameras had previously recorded him entering a home under construction. They said Travis McMichael shot Arbery while fearing for his life as they grappled over a shotgun.

Video of the fatal encounter was recorded by William “Roddie” Bryan, a neighbor who joined the chase. All three men are charged with murder. Prosecutors have said Arbery stole nothing and was merely out jogging when the McMichaels and Bryan chased him. They remain jailed without bail.

Issues surrounding citizen’s arrest could be aired in pretrial hearings in coming days.

Under the repeal bill, people who are mere bystanders or witnesses generally no longer have the right to detain people. Deadly force can’t be used to detain someone unless it’s in self-protection, protecting a home, or preventing a forcible felony. The changes retain Georgia’s “stand your ground” law, which says a person who is being threatened isn’t required to retreat.

Someone who is detained must be released along with their personal belongings if a police officer or sheriff’s deputy doesn’t arrive within a reasonable time.