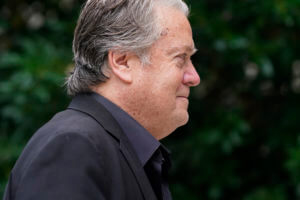 “It wasn’t optional. It wasn’t a request, and it wasn’t an invitation. It was mandatory,” Assistant U.S. Attorney Amanda Vaughn told jurors in her opening statement of Bannon’s contempt of Congress trial. “The defendant’s failure to comply was deliberate. It wasn’t an accident, it wasn’t a mistake. It was a choice.”

Bannon, a longtime adviser and strategist for former President Donald Trump, is facing a pair of federal charges after refusing for months to cooperate with the House committee investigating the Jan. 6, 2021, Capitol insurrection.

But his lawyers argued Tuesday that the charges against him are politically motivated and that Bannon was engaged in good-faith negotiations with the congressional committee when he was charged.

“No one ignored the subpoena,” Evan Corcoran told the jury.

In reality, he said, another one of Bannon’s then-lawyers, Robert Costello, contacted an attorney for the House committee to express some of Bannon’s concerns about testifying.

“They did what two lawyers do. They negotiated,” Corcoran said, adding that Bannon and his legal team believed “the dates of the subpoena were not fixed; they were flexible.”

An unofficial adviser to Trump at the time of the Capitol attack, Bannon is charged with defying a subpoena from the Jan. 6 committee that sought his records and testimony. He was indicted in November on two counts of criminal contempt of Congress, one month after the Justice Department received a congressional referral. Upon conviction, each count carries a minimum of 30 days of jail and as long as a year behind bars.

U.S. District Judge Carl Nichols, a Trump appointee, had previously ruled that major elements of Bannon’s planned defense were irrelevant and could not be introduced in court. He ruled last week that Bannon could not claim he believed he was covered by executive privilege or that he was acting on the advice of his lawyers.

Bannon, 68, had been one of the most prominent of the Trump-allied holdouts refusing to testify before the committee. He had argued that his testimony was protected by Trump’s claim of executive privilege, which allows presidents to withhold confidential information from the courts and the legislative branch.

Trump has repeatedly asserted executive privilege — even though he’s a former, not current president — to try to block witness testimony and the release of White House documents. The Supreme Court in January ruled against Trump’s efforts to stop the National Archives from cooperating with the committee after a lower court judge — Tanya S. Chutkan — noted, in part, “Presidents are not kings.”