DENVER (AP) — A grand jury has indicted two Colorado sheriff’s deputies in the death of a 22-year-old man who was shot after calling 911 for roadside assistance while experiencing what his mother described as a mental health crisis, according to online court records. 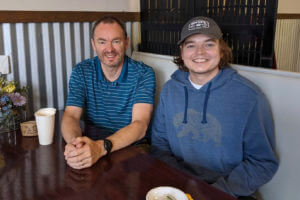 FILE – In this image provided by Sally Glass, her son Christian Glass, right, sits with his father, Simon Glass, in Colorado on March 11, 2021.  (Sally Glass via AP, File)

The indictments of former Clear Creek County Sheriff’s deputies Andrew Buen and Kyle Gould were returned Wednesday, five months after Christian Glass was killed by law enforcement. The case has become a flashpoint amid a national outcry for police reforms focused on crisis intervention and de-escalation.

Charges against the two deputies include second-degree murder, official misconduct, and criminally negligent homicide, according to the court records, which did not provide further details.

The records did not list a lawyer for either deputy. A telephone message left at a number believed to be Buen’s was not immediately returned. No telephone listing could be found for Gould.

A federal judge issued warrants for both Buen and Gould, who face bonds of $50,000 and $2,500 respectively, according a press release from Fifth Judicial District Attorney Heidi McCollum, who empaneled the grand jury.

Nichole Lentz, spokesperson for the Clear Creek County Sheriff, said in a statement that both officers have been terminated following the indictments.

The sheriff office’s ongoing internal investigation found “policy and procedural failures,” Lentz said, adding that the office’s initial news release following the shooting “does not reflect the entirety of what happened on that terrible night.”

Late on June 10, Glass called the police because his car had become stuck on an embankment. Body camera videos show Glass refusing to get out of his car while telling police he is “terrified” and making heart shapes with his hands to officers.

Officers talked to him to try to persuade him to leave the car. After more than an hour of negotiations, police said Glass was being uncooperative and they broke the passenger window and removed a knife from the vehicle. 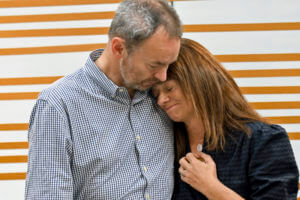 FILE – Simon and Sally Glass comfort each other during an emotional news conference about the death of their son, Christian Glass, Sept. 13, 2022, in Denver. (AP Photo/Thomas Peipert, File)

Glass offered to throw two knives out of the window but the video shows officers telling him not to.

Once the window was shattered, Glass seemed to panic and grabbed a second knife. Police then shot Glass with bean bag rounds and shocked him with a stun gun. The footage shows Glass twisting in his seat and thrusting a knife toward an officer who approaches the rear driver window. Then another officer fired his gun, hitting Glass six times, according to the autopsy report.

During a September news conference, Glass’s mother, Sally Glass, said her son suffered from depression, had recently been diagnosed with ADHD and was “having a mental health episode” and was “petrified” the night he was killed.

Jesse Bedayn is a corps member for the Associated Press/Report for America Statehouse News Initiative. Report for America is a nonprofit national service program that places journalists in local newsrooms to report on undercovered issues.