CLAYPOOL, Ariz. (AP) — Authorities in east-central Arizona say the victims in a double homicide were the grandparents of the 18-year-man who lived with them and who was arrested in the case on suspicion of murder and other crimes. 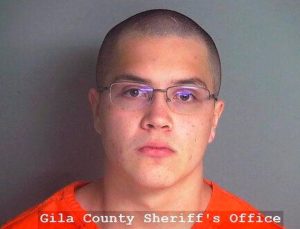 The Gila County Sheriff’s Office on Tuesday identified the victims as 67-year-old Jose Oropeza and 70-year-old Katherine Oropeza and the arrested grandson as 18-year-old Abram Oropeza.

The Sheriff’s Office says the victims were apparently shot and that their bodies were found Monday in their Claypool residence following a fire.

The office says the grandson was arrested after a traffic stop by law by the Sheriff’s Office and the state Department of Public Safety.

The grandson was jailed on suspicion of two counts each of of first-degree murder, arson of an occupied structure and tampering with physical evidence.