WESTMINSTER, Md. (WMAR) — The Carroll County Sheriff’s Office in Maryland is still investigating circumstances behind a dismembered body discovered on the side of the road Sunday.

Deputies took Ravi Maganbhai Pansuriya into custody that same day, on suspicion of murdering his father. 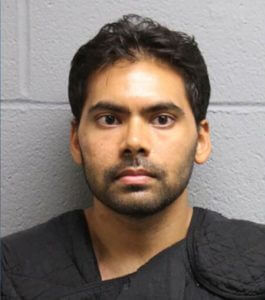 Charging documents reveal details that lead up to his arrest.

Deputies were initially called to the home of a woman who reported her husband, Maganbhai Pansuriya, missing.

She told investigators about a “runner” style rug that was taken from the laundry room. Deputies also noticed blood on the floor of the home bathroom and garage.

As deputies were taking that report, another 911 call came in for a body lying on the shoulder of Medford Road.

On scene detectives found a man suffering from multiple stab wounds. He’d been wrapped in multiple blankets and a “runner” style rug like the one the woman described.

Ravi had returned home in his dad’s vehicle hours earlier. On the back bumper investigators saw what they believed to be human flesh.

During a search of the home, police found tools including a hatchet with blood, tissue, and hair on them.

Packaging for the hatchet was also located and taken to a local Walmart, where surveillance video confirmed that Ravi purchased it.

Although police are still waiting to confirm the identity of the body, Ravi was arrested and charged with first and second-degree murder. So far, no motive has been revealed.

He’s due back in court in November.

This story was originally published Oct. 4, 2022 by WMAR in Baltimore, an E.W. Scripps Company.