NEW YORK (AP) — Filmmaker Paul Haggis’ defense sought Friday to undermine the credibility of a publicist who accused him of rape, with his attorneys suggesting a whiff of romantic interest in communications that his accuser says were just professionally friendly gestures.

Cross-examining Haleigh Breest at the trial of her rape lawsuit, defense attorney Priya Chaudhry also challenged the accuser’s account of feeling trapped during the 2013 encounter in Haggis’ apartment. 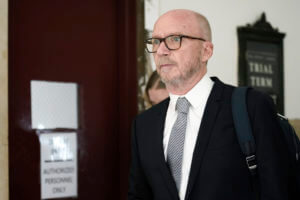 Breest says the screenwriter-director forced her into oral sex and intercourse after pressing her to have a drink at his apartment. They had run into each other at a movie premiere where she was working and he was a VIP guest.

Haggis says that what happened between them was consensual.

Breest and the filmmaker, known for writing best picture Oscar winners “Crash” and “Million Dollar Baby” in the early 2000s, began crossing paths at premieres around 2012 and exchanged some emails.

Chaudhry pointed to an October 2012 message in which Breest wrote to Haggis to say “we miss seeing you” at premieres, adding some compliments on how a film project of his was coming together and asking how long he’d be at the shoot, in Italy. 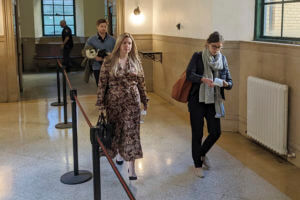 Publicist Haleigh Breest arrives at court in the Manhattan borough of New York City, on Wednesday, Oct. 19, 2022. Jurors are getting their first look at a lawsuit that pits Oscar-winning moviemaker Paul Haggis against Breest, who alleges that he raped her. He says their 2013 encounter was consensual. (AP Photo/Ted Shaffrey)

Breest characterized the exchange as a “touchpoint email” meant to maintain contact on her employer’s behalf.

Chaudhry referred to another email, from Breest to her boss, in which Breest enthused about seeing Haggis on the guest list for the screening on the night she ended up going to his apartment.

His lawyer drilled down on Breest’s tone, her penchant for signing messages with a warm “xx” or the like, and even her use of exclamation points. And Chaudhry asked whether Breest would flirt only with men to whom she was attracted.

“For the most part,” Breest said. “I think that on occasion, I’ve probably flirted with people where there’s no romantic interest, possibly.”

Breest testified Thursday that she didn’t flirt with and had no romantic feelings toward Haggis, and that she unequivocally told him as much when she agreed to a nightcap at his apartment.

“Just so you know, I’m not spending the night,” she told him, according to her testimony.

Breest testified that she felt obliged to accept Haggis’ offer of a drink and deflected his initial attempts to kiss her but stayed to try to avoid alienating an important person in her industry. She told jurors she was “absolutely paralyzed and terrified” when she said the assault escalated.

His lawyer, however, repeatedly quizzed her about remaining at Haggis’ apartment.