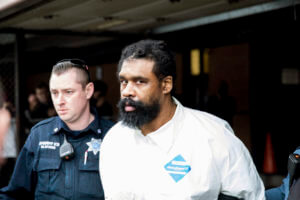 NEW YORK (AP) — A federal grand jury handed up hate crime charges Thursday against the man accused of stabbing five people with a machete during a Hanukkah celebration north of New York City.

Thomas, 37, also faces state charges in the Dec. 28 attack inside the home of a rabbi in Monsey, N.Y. He is being held without bail on the federal charges.

“We now allege that he did this with the intention of targeting his victims because of their religion,” Manhattan U.S. Attorney Geoffrey Berman said in a news release. “Thomas faces life in prison for his alleged violent acts of prejudice and intolerance.”

A message was sent to Thomas’ defense attorney, Michael Sussman, seeking comment. Sussman has said Thomas had a long history of mental illness. He has requested Thomas undergo a psychiatric evaluation.

Authorities have said they found a blood-stained 18-inch (45-centimeter) machete in Thomas’ car, along with a knife smeared with dried blood and hair. They also said Thomas had handwritten journals containing anti-Semitic references and recently used his phone to look up information on Hitler and the location of synagogues.

The Hanukkah stabbings came amid a wave of anti-Semitic attacks targeting Orthodox Jewish communities in and around New York City.

One of the men wounded in the machete attack remains in serious condition. His family has said he may have permanent brain damage.