NEW YORK (AP) — Harvey Weinstein says he is a pioneer in advancing the careers of women in the film industry.

“I feel like the forgotten man,’’ Weinstein said in an interview published Sunday in the New York Post. 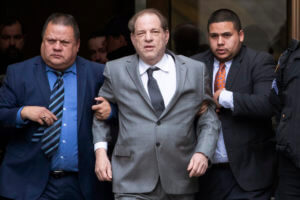 “I made more movies directed by women and about women than any filmmaker, and I’m talking about 30 years ago. I’m not talking about now when it’s vogue. I did it first! I pioneered it!” he said.

Scores of women have accused the movie mogul of sexual misconduct. He has denied non-consensual sex allegations. He faces a Jan. 6 trial on rape and sexual assault charges in state court, where he has pleaded not guilty.

“It all got eviscerated because of what happened,’’ Weinstein said in the interview. “My work has been forgotten.’’

Weinstein was interviewed while recuperating at the New York-Presbyterian/Weill Cornell Medical Center on Friday, a day after spinal surgery.

“The issues and charges in the criminal case should be the sole focus at this time,” lawyer Gloria Allred, who represents a number of accusers, said in a statement to ABC News.

“Whatever he has done professionally for women may or may not be relevant at the time of sentencing if he is convicted,” said Allred. “For now, any attempt by him to recast his tattered reputation or to appear to ask for sympathy will only serve to trigger many of those who allege that they are victims of Mr. Weinstein.”