BRUNSWICK, Ga. (AP) — A judge has postponed a court hearing this week for a former Georgia prosecutor charged with meddling in the police investigation of the 2020 killing of Ahmaud Arbery. 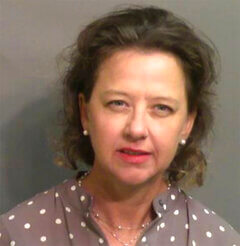 Johnson has not appeared in court since she was indicted in September 2021 on charges of violating her oath of office and hindering police investigating Arbery’s killing. White men in pickup trucks chased the young Black man on Feb. 23, 2020, after spotting him running in their neighborhood outside coastal Brunswick. The chase ended with Arbery being shot dead in the street.

The man who initiated the chase, Greg McMichael, was a retiree who had worked as an investigator for Johnson. She was still Glynn County’s top prosecutor when Arbery was killed, but lost her reelection campaign a few months later.

The indictment against Johnson accuses her of using her office to try to shield Greg McMichael and Travis McMichael, his adult son who fired the fatal shotgun blasts, from prosecution.

Both McMichaels and a neighbor who joined the chase and recorded cellphone video of the killing, William “Roddie” Bryan, weren’t arrested until more than two months later when the video leaked online and the Georgia Bureau of Investigation took over the case from local police.

The McMichaels and Bryan all have since been convicted of murder and federal hate crime charges.

Johnson has denied wrongdoing, saying she immediately recused herself from the investigation into Arbery’s death.