In a post on the Martin County Sheriff’s Office Facebook page, investigators said the remains were found near a “gator-infested canal bank” about three miles inside the park. 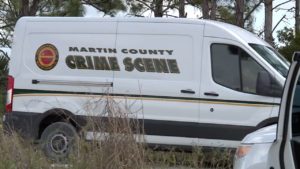 Investigators were at the Hungryland Wildlife Preserve in Martin County on March 10, 2022, after human remains were discovered. (WPTV)

Detectives and officers with the Florida Fish and Wildlife Conservation Commission are at the scene Thursday.

Sheriff William Snyder said a Florida Game and Freshwater Fish Commission biologist was working in the preserve Wednesday morning and spotted what they thought was an alligator with a human arm.

Commission law enforcement was called to the scene and spent much of the day looking for the remains. By the evening, they found the arm and called the sheriff’s office.

Detectives on Thursday later found what appeared to be other human remains.

In the last 24 hours, officials said they found two body parts, including one that was spotted in the mouth of an alligator.

Law enforcement is faced with the challenge of determining if the remains are from the same person, scouring a huge area for evidence.

They said there is a high likelihood that animal activity moved or destroyed other remains. The remains found so far were discovered a mile and a half from each other.

A sheriff’s office sniper was at the scene to protect the divers from alligators while they searched.

Cadaver dogs have been searching the grounds, along with deputies on ATVs and a helicopter.

“We can’t rule out the possibility that somebody fell in the water and died of natural causes out here, but it doesn’t look like that to us,” Snyder said. “One thing we always have to take into consideration is we’re just a few miles from Palm Beach County. We have had what we call body dumps, disposing of human remains here in Martin County, that originated in Palm Beach County. That’s been going on for decades.” 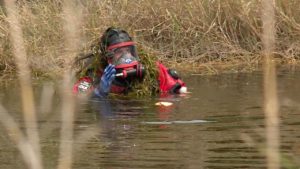 Snyder believes the remains are from a white man.

He said they do not have anyone missing in the county but are in touch with Palm Beach County, which has 16 missing people.

Because it doesn’t appear the remains were at the preserve for a long period of time, the sheriff is hopeful to pull fingerprints and make an identification quickly before waiting for a DNA test.

The park is currently closed to the public.

This story was originally posted March 10 by WPTV in West Palm Beach, an E.W. Scripps Company.