MOSCOW, Idaho (KIVI) — The Moscow Police Department says efforts will begin Friday morning to remove potential biohazards and other harmful substances that were used to collect evidence from the King Street home where four University of Idaho students were murdered in mid-November. 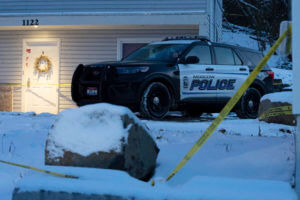 FILE – A Moscow police officer stands guard in his vehicle, Tuesday, Nov. 29, 2022, at the home where four University of Idaho students were found dead on Nov. 13, 2022 in Moscow, Idaho.  (AP Photo/Ted S. Warren,File)

Crews will be back at the crime scene Friday for “remediation activities”. Police say there is no timeline for completion, but the property will be returned to the property management company when they are finished. In the meantime, the home remains an active crime scene under police patrol.

Investigators continue processing and working through more than 9,025 emailed tips, 4,575 phone tips, 6,050 digital media submissions, and have conducted over 300 interviews, according to the news release.

“Investigators believe someone has information that adds context to what occurred on the night of the murders and continue requesting additional pictures, video, and social media content,” the release said. “Our focus remains on the investigation, not an individual’s activities displayed in the tip.”

Police are also still asking for information regarding who may have been driving a white 2011-2013 Hyundai Elantra believed to be in the immediate area of the King Road residence during the early morning hours of November 13th. Investigators believe the occupant(s) may have critical information to share about this case.

They still have not made any arrests, publicly named a suspect, or located the murder weapon.

A press conference has been scheduled for Friday, Dec. 30 at 1 p.m. local time.

This story was originally published Dec. 29 by KIVI in Boise, an E.W. Scripps Company.